Don't Just Use the Index!

As I consult with people who visit our family history center, I always encourage them to not just rely on the indexes for their information, but to use images of the original records. I came across another case this week of why this is important.

I was looking for information on the second husband of one of my cousins. His name was Thurston Viele and on his WWI draft card his birthday was given as 10 June 1881. I found him in several censuses with his first wife Ida, but one census seemed very odd. It was the 1892 New York State census. Thurston should have been about 11 years old, but there he was in the index born about 1868 (24 years old). 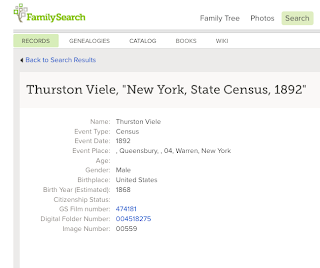 I clicked on the link to look at the image and here is what I found.

Here's a blow-up showing Thurston and his wife Ida, ages 24 and 23.

Remember this is indexed as the 1892 New York State census. However, if we look at the year listed on this page it is not 1892. 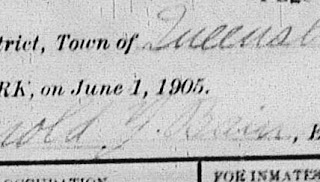 No it's not the 1892 census at all, but the 1905 census. In 1905, Thurston's age should have been 24, so this fits with other records. I searched for Thurston in the 1905 New York State census, and sure enough the index lists him and Ida as 24 and 23 years of age, but when I click on the image link, it takes me to an image that does not have this couple listed. Here it is. It's a nice image of pages from the 1905 New York State census, but not the pages that contain Thurston and Ida. 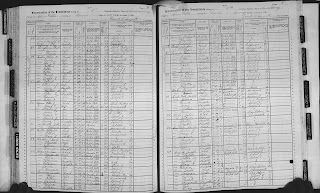 I did find Thurston in the 1892 New York State census, age 11, but indexed as Thurston Velia. 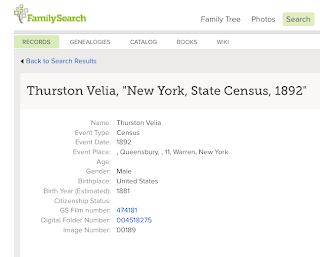 And here is his family.

So, be very grateful for those indexes. They have been and will continue to be great helps in finding records, but don't count on them always being correct.