Excerpt from "Letters from the Pacific"

These are two of the many letters written between Norma and Reinhart Kowallis while he was stationed on the island of Okinawa in 1945.  In these letters she talks about her sister's Audrey and Phyllis and Ruth and Glena, her brother LaMar, her parents, her brother-in-laws Wayne and Spence, her daughter Cheryl and nephews Jay and David, along with assorted other relatives and neighbors. The letters are currently being compiled into a book. 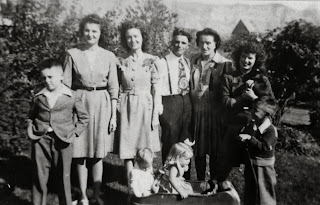 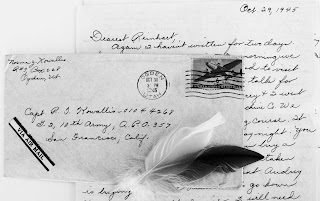 Letter to Reinhart from Norma, which included two goose feathers. The feathers and the letter all returned from Okinawa intact. 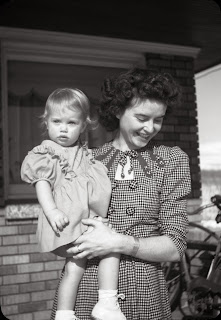 Norma (Jensen) Kowallis holding her daughter Cheryl in the fall of 1945.

Just think–today I received two letters from you–dated the 20th of Oct & the 21st. You say you arn’t getting many letters from me & I’m not getting many from you. Here is one way you can tell if you are getting all my letters. If a day goes by & I don’t write, I always mention it in my letter. I usually say, “I didn’t get to write yesterday,” or something to that effect. I am wondering if you received the letter where I listed all of the pictures the family wanted printed up from those you developed & printed for me.
So–you are thinking of trading me off for Ruth. Tsk Tsk! I never thought it would come to that. Ruth is still going with that friend of Margaret’s–much to the families displeasure. I do wish she could find a good man with a fine disposition like yours–but then there’s only one like you in the world & I just won’t give you up–no sirree.
Glena is the bell of the ball. About five fellows call her every night. She is going with a Lee Lollie (who is a Catholic) but he goes to our church & he says he is going to join it. Then of course she is still writting every day to Alma.
Spence doesn’t expect to get home until February. He has just been writting about his experiences in Switzerland. They could only spend so much while there & he saw something he wanted for Audrey for Christmas so he spent what he had & then sold his shirt, two shaffer life time pens & his eversharp pencil, his rain coat, socks, candy, gum & his insignias. Then he sold some of his American money. He was broke & he had five days left to stay in Switzerland & he didn’t know what he was going to eat. I think Spence will find a way though–he usually does.
Why couldn’t it have been you coming home–I guess I hadn’t better say “instead of Paul,” because I’m glad he is going to get home, but I just wish you could get a break like that.
That is pretty nice–you get to go to Church twice in a day & then get pie alamod & ice cream. They must have some pretty good meals down where Paul is.
Have you seen any more of Delbert? Aunt Anna hadn’t heard from him the last I saw her. Maybe she has by now. He isn’t very sociable, but maybe you could help him a little.
I went to Relief Society this afternoon. We practiced our play after meeting. Just as we were about to leave it just started blowing & pouring down. I was glad Amelia had her car. As soon as I came in the door at home Cheryl came dashing in the front room from the kitchen & calling “Ma Ma.” She triped & went flat but scrambled up & kept coming. I surely have to laugh at her. She thinks those beads you sent are for her & she just about had a fit when I took them. She wants to take all the letters she finds down to the mail box. They are all for “Da Da.” I tell her to pull her pants up if they sort of hang down & she reaches down & tugs away to get them up & just looks so funny.
Audrey is going down to Sing for a barn dance at the 6th ward & Dad & Mom are going too. I think I’ll just go to bed & try to get some rest. Cheryl gets me up at 6 o’clock in the morning calling “toe toe” & jumping on my head & pulling my hair. Then she plants three or four juicey kisses on my mouth. Then I usually open my eyes & give her a grin. She is always so tickled when she finally gets me to open my eyes.
We’ll be looking for you for Christmas so don’t dissapoint us. We are so sure that when Santa comes prancing in with his reindeers it will be you that he will have in that big black bag–so don’t dissapoint us. Of course if you come earlier why you can just skip the black bag.

All My Love & then some
Norma 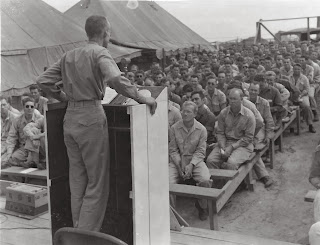 LDS Servicemen's Conference in Okinawa in October of 1945. Over 400 LDS servicemen attended the conference including Capt. Reinhart Kowallis.
Posted by Urthman at 5:28 PM