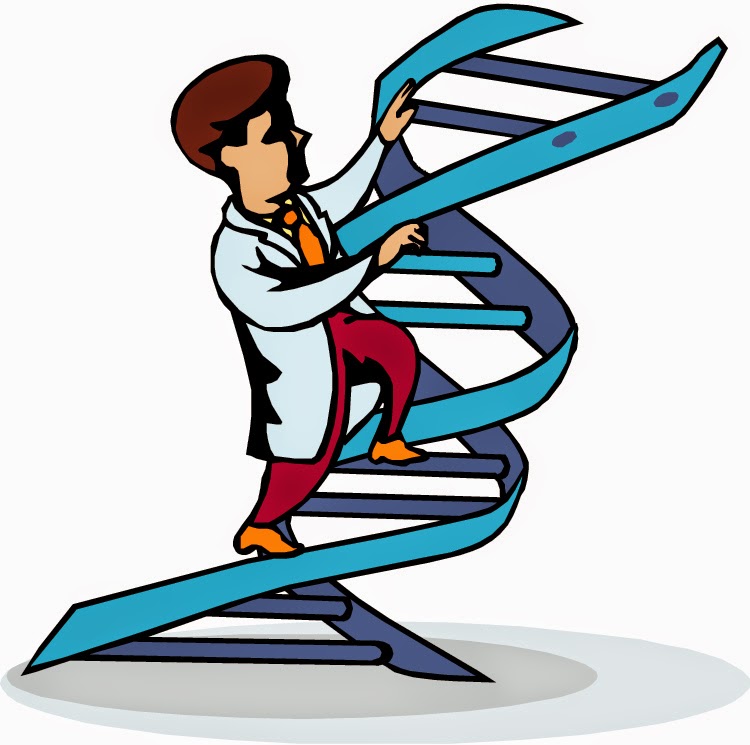 I have now taken DNA tests using all three of the major companies (Family Tree DNA, 23andMe, and Ancestry) that do testing for genealogical purposes.  Here is my personal review of these three.

First, I have no reason to suspect that the data is bad from any of these companies. They all seem to provide reasonable agreement on my autosomal DNA, which is the only test they do in common. I'll start with FTDNA, which was the first company I did testing with.

Family Tree DNA (FTDNA) offers the most comprehensive suite of tests including Y-DNA, mitochondrial DNA, and autosomal DNA. Y-DNA can be used to research your direct paternal line if you are male or if you have male relatives who you can convince to be tested. Mitochondrial DNA (mtDNA) is inherited from your direct maternal line and can provide insights into this lineage, however, mtDNA has generally proven to be less useful than Y-DNA or autosomal DNA.  Autosomal DNA tests all of your chromosomes except the Y-chromosome and finds pieces of DNA that you share in common with other people in the companies database. I did all three of these tests with FTDNA and here is what I found about my family.

Y-DNA TEST: With FTDNA, you can have 37, 67, or 111 markers tested. Or you can have what they call the "Big Y" which tests your entire Y chromosome. Costs range from $169 to $268 to $359 to $695 (for the Big Y). I did the 37 marker test for $169, but may upgrade to a higher level in the future. The only problem I had with FTDNA was that they copied the data from my test incorrectly for two of my markers. I would never have known this except for the fact that another DNA researcher contacted me after I had shared my DNA to indicate that for one of the markers, the value was not a possible value and that I should check with FTDNA to see if there had been an error in transcribing the data. It was corrected fairly quickly when I called to discuss the problem with the company.  The advantage of FTDNA, of course, is that they are the only company doing this test for genealogical purposes. So far, I have not found any exact matches to my 37 markers, but I have been matched to a few probable relatives who are perhaps 10-30 generations out from me. All of these matches are from Eastern Europe. This test also gives me my male haplogroup, which according to FTDNA is I-M423, although the haplogroup tree is still evolving and the groups you are initially placed in can change fairly quickly. FTDNA allows you to join or set up groups for research purposes. I have set up a Kowallis Family group and have joined a couple of groups that have been quite helpful in understanding my Y-DNA. I would definitely give two thumbs up for this test but would like to see FTDNA improve their graphics on their Y-DNA pages.

mt-DNA TEST: I had this test done as well with FTDNA because I have some unresolved issues with my maternal line. The line disappears in Rhode Island in the 1700s with a woman named Frances, who was married to Jonathan Childs. We have been unable to find out anything about Frances. I was hoping that I might tie into a cousin who had the same mt-DNA and had more information on this family line. The cost of the test is $199. It did give me my maternal haplogroup (U3a1c) and 3 matches that are at a genetic distance of 1 (which basically means they are very distant relations). I have as yet not found any exact matches. Still there is the chance that in the future someone will take the test who is an exact match. Even then, they could be a fairly distant relative, but it would be a starting place to perhaps solve the problem of Frances. I would say that this is the least useful of the tests I have had done and, based upon the cost and the possible benefit, I would not recommend it until more work has been done by researchers using mt-DNA to solve genealogy problems. One thumb down.

Autosomal DNA (Family Finder TEST): This is certainly one of the funnest and most useful of the genetic tests. The cost from FTDNA is $ 99, probably because this is the test offered by 23andMe and Ancestry as well. Competition has brought the price down to a very reasonable level. This test looks at all of your chromosomes (except the Y-chromosome) and finds pieces that are identical to other people in the database. Depending on the lengths and numbers of pieces you have in common with someone else, the test can give you an idea how closely you are related. Additional work by you (looking up your matches family trees and finding common ancestors) can help you to identify which pieces of DNA come from which family lines. These tests also give you information on your deeper ancestry based upon how similar you are to groups in their database. So my Family Finder test gave me over 190 matches with possible cousins, suggested how close these cousins might be (2nd cousins, 3rd cousins, distant cousins, etc.), and allowed me to download the data on my matches. I have contacted several of these cousins and been able to determine who our common ancestors are. My deep ancestry from FTDNA is shown below and suggests that most of my ancestry is European, with 33% from Germany, Denmark, and France, 28% from Great Britain and Netherlands, 26% from Eastern Europe, 8% from the Northern Mediterranean (Spain, Italy, Greece), 3% from Norway/Sweden, and 1% from Finland. The other 1% (non-European) is marked as Anatolian or Caucasus in origin. This is a test that is worth doing; two thumbs up. 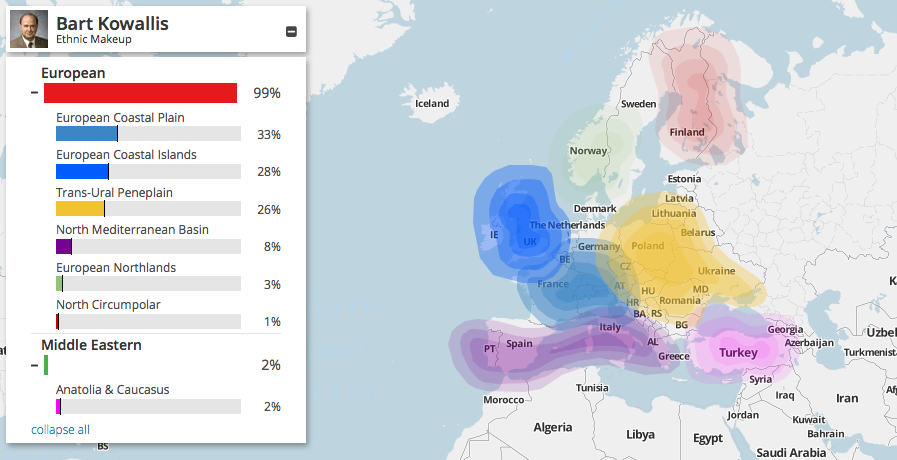 So, what about 23andMe and Ancestry. 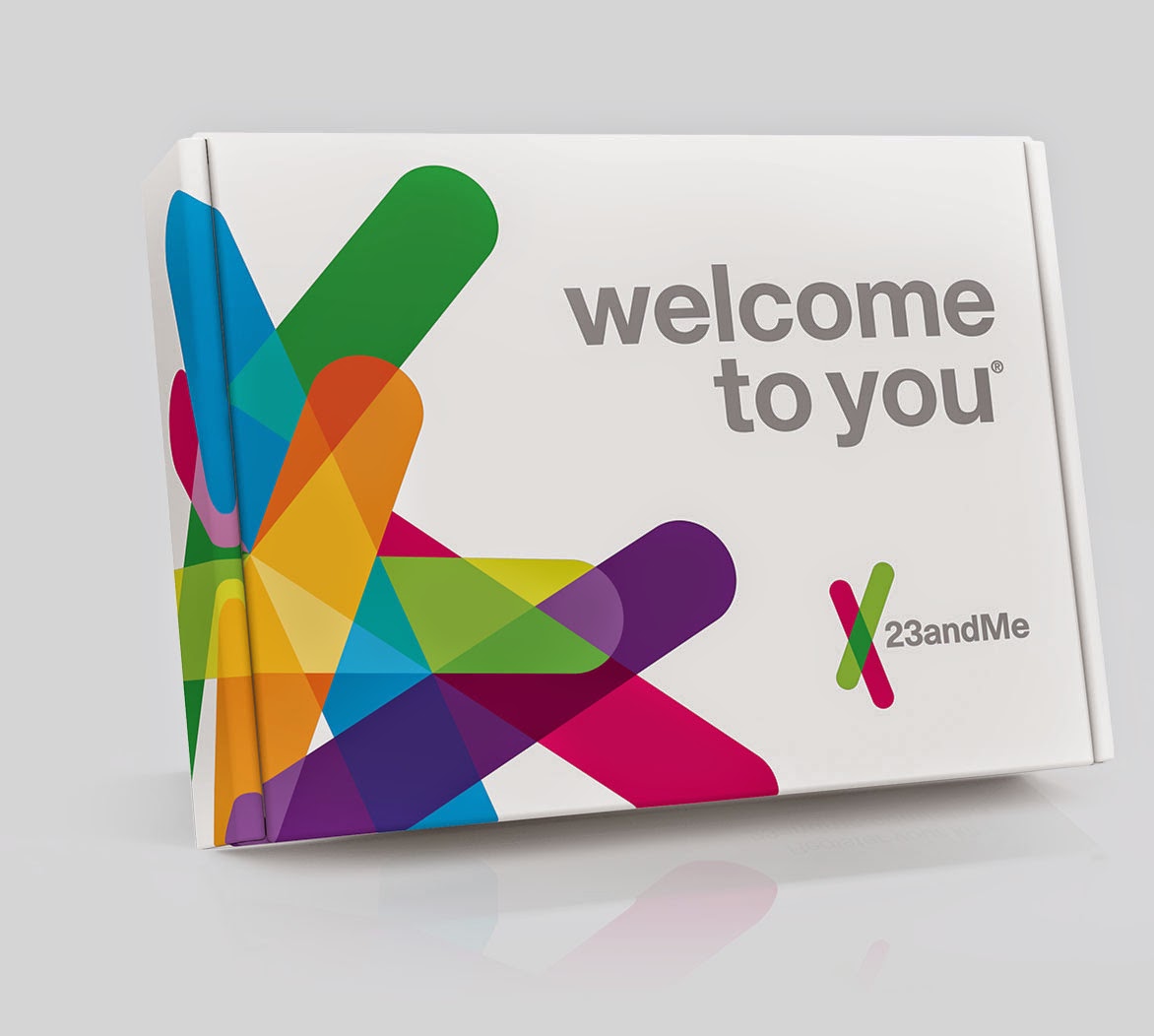 I have already reported on my results from 23andMe in an earlier blog entitled "Yes, I am a Caveman." But that was only part of the autosomal DNA story from 23andMe. I also got a deep genealogical report from them as well as a report on my maternal (U3a1) and paternal (I2a2a) haplogroups. The map below shows the results from 23andMe. This report shows me to be 99.8% European, with 34% German and French, 16% British and Irish, 5% Scandanavian, 35% unspecified Northern European, 6% Eastern European, and about 4% unspecified European. The remaining 0.2% are from North Africa and Yakut.  You can see that there are similarities and differences in the reports from the two companies. 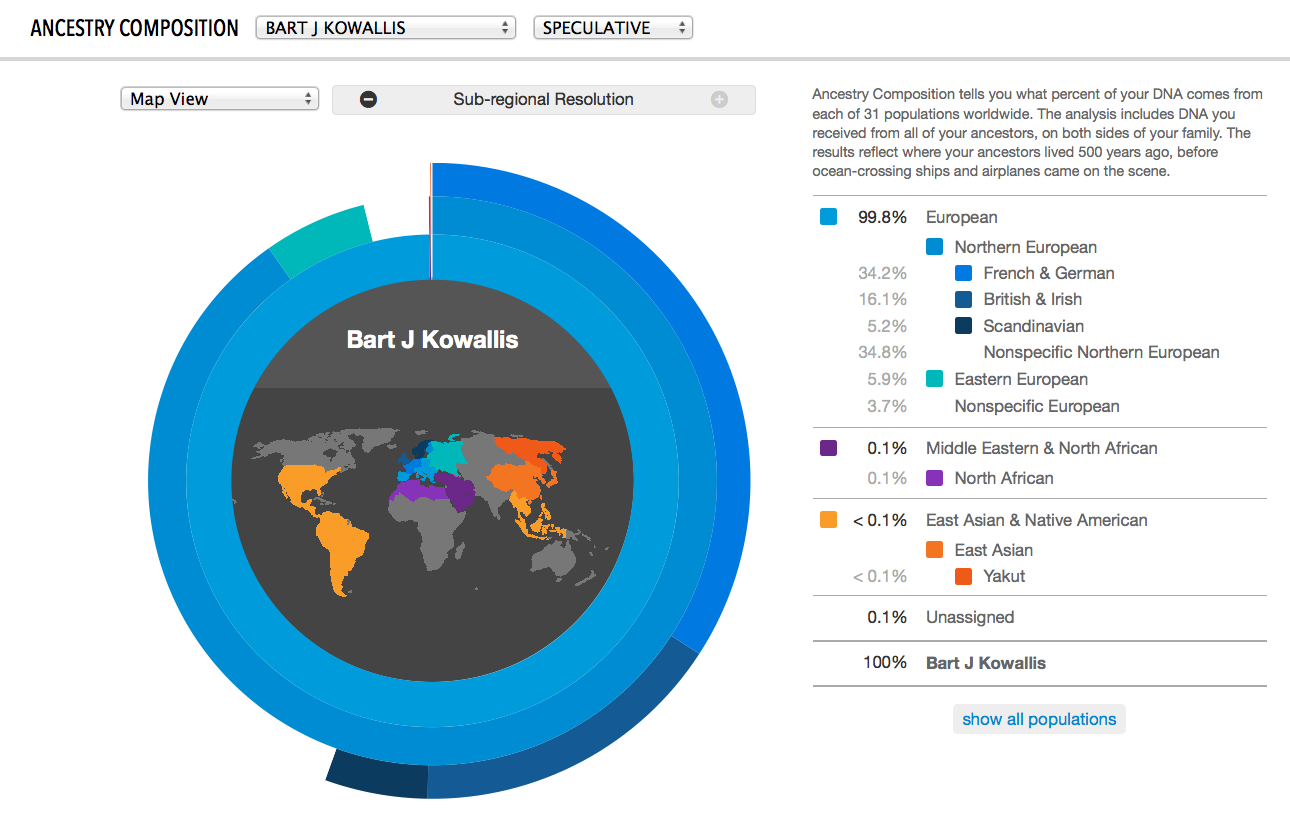 23andMe also allows me to map onto my chromosomes the regions where these ancestral bits of DNA are located. Below is the graphic they provide. I've modified the colors a bit to make it more readable because most of the colors were shades of blue. This kind of a map could be useful in helping to identify which family lines some of my cousin matches come from. 23andMe, like FTDNA, allows me to download my data and my matches data in an excel spreadsheet for further analysis. I find this to be a very useful feature. The graphics and web site's general appearance and layout are much better on 23andMe than on FTDNA. 23andMe also matched me up with over 900 possible cousins, several of them fairly close. The one issue is that of the half dozen shown as possible 2nd cousins, only one of them has responded to me and shared information. Bummer! But I have been able to link up with several cousins and determine who our common ancestors were. The cost of the test is the same as FTDNA, $99. I give this site and test two thumbs up. 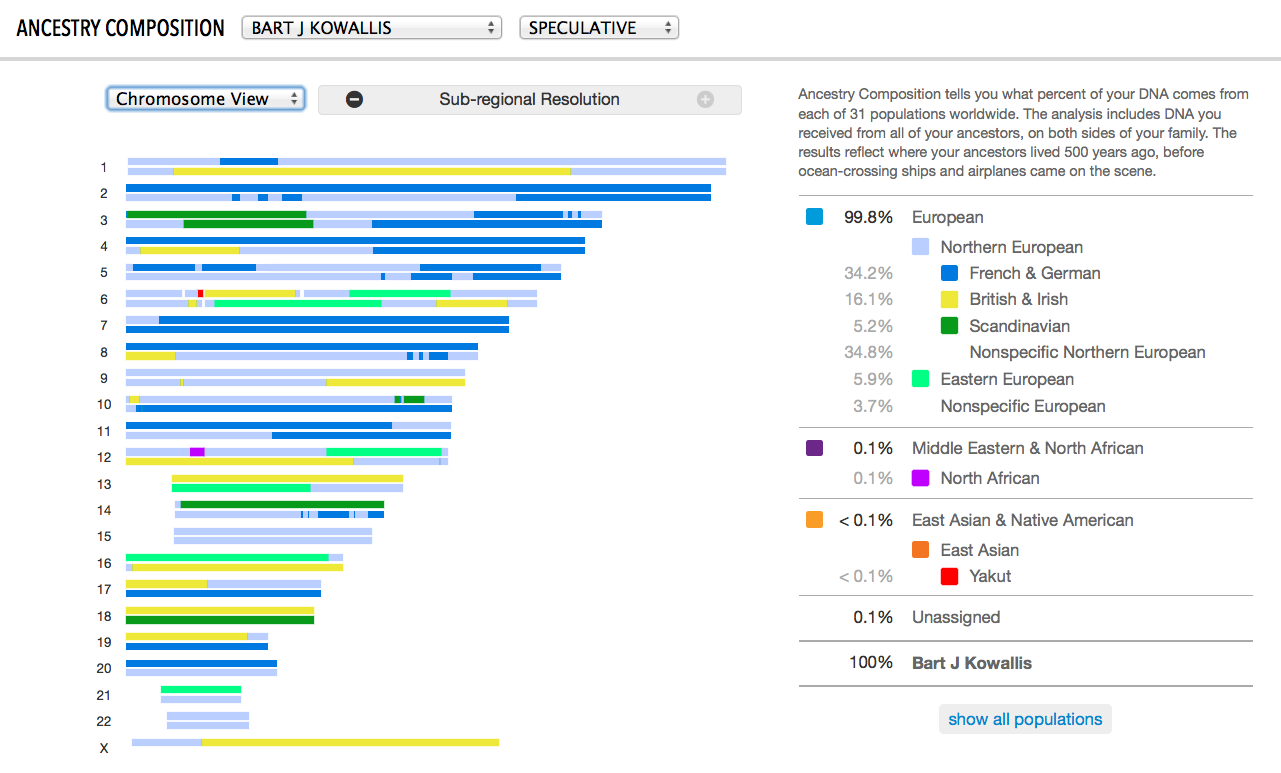 Lastly, I also did the autosomal test with Ancestry.com. 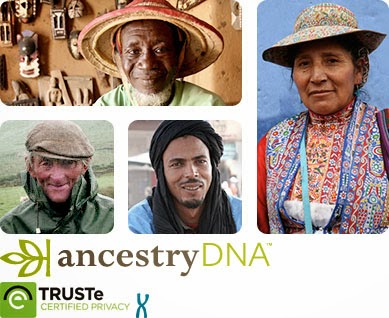 They also provide a deep ancestry map shown below. Ancestry puts me at 96% European with 29% Scandinavian, 18% British, 16% West European (German, French, Dutch), 15% Eastern European, 10% Irish, and 8% Italian/Greek. The other 4% are 3% Caucasus and about 1% North African. Again, there are similarities and there are differences with this analysis and the other two companies. Ancestry also matches me up with cousins. I had 84 cousins in this database, one of them a 1st cousin. The problem I have with Ancestry is that they do not allow you to download the DNA information for your matches, so it is difficult to compare data with the other two websites. I would give Ancestry's site one thumb up for that reason. 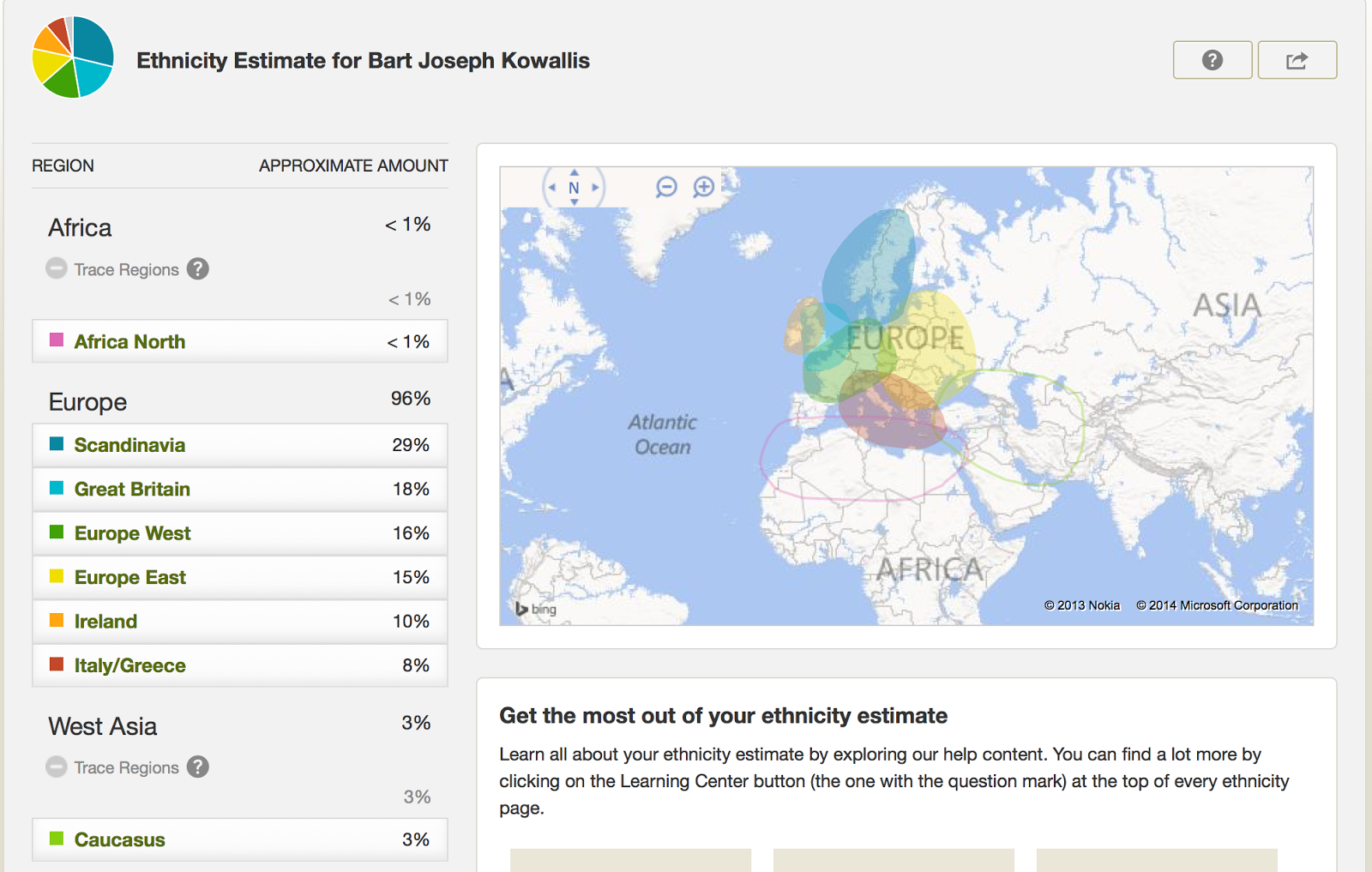 Well that's about all I have to say for now on this issue. I may have more in the future, so come back again. You can read more about DNA Testing and understanding your results at these web sites: