One of the children of James McGibeney and Hannah Sterritt (see my earlier post on this couple) was Hugh McGibeney. I am certainly interested in more information on this talented man and his family for a genealogy and family history I am writing. The Washington State Historical Society has a picture of Hugh as a young boy that I cannot post here. But here is the information I have on his family. I'd love to hear from you if you have additional information or photos.

Hugh H. McGibeney, born in November 1865 in Minnesota. He married on 25 Apr 1888 in Buchanan Co., Iowa to Grace L. Holman who was born in December 1868 in Iowa. “The Holman family were a particularly gifted and versatile family in a musical way, and had several different organizations of their own. Miss Grace Holman traveled with the McGibeney Concert Troupe, and married Hugh McGibney, a fine violinist.” Both Hugh and Grace are listed as musicians in the 1900 U.S. Census. By 1920 and 1930, Hugh is still working as a music teacher (violin), but Grace is a Department Head working for the Red Cross. Hugh’s most famous pupil was likely Eddy Brown. Here is a quote from a biographical article on Brown:

Brown, Eddy (15 July 1895-14 June 1974), violinist and radio pioneer, was born in Chicago, Illinois, the son of Jacob Brown, a tailor and amateur violinist from Austria, and Rachel “Ray” Brown (maiden name unknown) from Russia. His mother, who had a keen interest in Christian Science, named him after Mary Baker Eddy. The Brown family moved to Indianapolis when Eddy was four. He took his first violin lessons from his father and then studied with Hugh McGibeney at the Metropolitan School of Music (later Butler University’s Jordan College), giving his first public recital at the age of six. In 1904 he traveled to Europe and entered the Royal Conservatory of Music in Budapest to study violin with Jenö Hubay. His teachers there included Béla Bartók, Zoltán Kodály, and cellist David Popper. In 1906 Brown won the Budapest Concerto Competition. (Finishing second was a young violinist and fellow Hubay student named Jenö Blau, who later changed his name to Eugene Ormandy and became a famous conductor.) The next year Brown opened the new hall at the Liszt Conservatory with a performance of the Mendelssohn concerto...Columbia Records quickly signed up the young sensation, issuing his first recordings in the summer of 1916, and Carl Fischer, Inc., published a series of his violin transcriptions.

Hugh was appointed director of the Roberts Park Choral Society in Indianapolis in 1911, and served in that position for 20 years. Hugh and Grace had the following children:

1. Mignon McGibeney, b. June 1890 in Iowa. In 1917, Mignon performed in the musical comedy Very Good Eddie. The play was produced by Elisabeth Marbury and F. Ray Comstock, written by Philip Bartholomae and Guy Bolton, with music by Jerome Kern and lyrics by Schuyler Greene. The play had just finished a successful 341 performance run on Broadway.

2. Donald McGibeney, b. 26 September 1892 in Independence, Buchanan Co., Iowa. He is single and working as a writer (living with his parents) in 1920 and 1930. Donald wrote the story for the silent film Two Arabian Nights (1927) starring William Boyd, Mary Astor, and with a minor role for Boris Karloff that was produced by the young aviation mogul Howard Hughes and won an Academy Award for Best Comedy Direction. He also co-wrote the story for at least two other silent films, When the Desert Calls (1922) and Woman Wise (1928). Donald also wrote the classic murder mystery 32 Caliber (1920) which is still currently available in e-format. 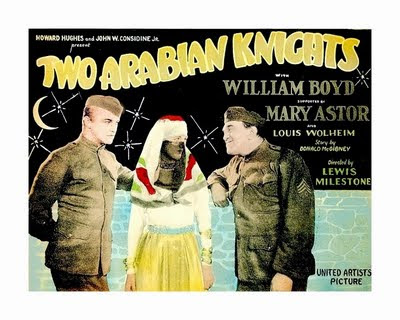 3. 1900 US census, Indianapolis, Marion Co., Indiana, e.d. 56, sheet 7A, dwelling 119 (this census says that Hugh was born in Oregon, his father in Scotland, and his mother in Massachusetts, all of which are inconsistent with other census records).