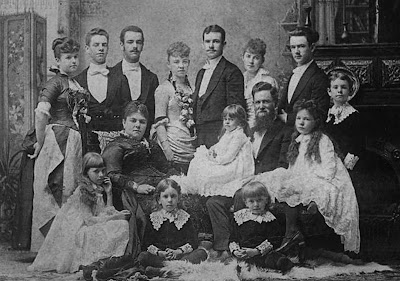 JAMES B. MCGIBENY, son of Samuel McGibeny and Hopewell Duers, was born 7 February 1835 in New York. He married HANNAH STERRITT who was born in February 1844 in Pennsylvania. The family is difficult to find in census records, probably because they were always traveling. The book, Allegany County and Its People had the following about James and his family:

JAMES B. McGIBENY son of Samuel, born Feb. 7, 1835, came with his father in 1839 to West Almond, was graduated from Alfred University in 1860, married Hannah STERRITT of Philadelphia, Pa., in 1862, and in 1864, went to Minneapolis, Minn., as superintendent of music in the city schools. He was engaged there four years, at Winona two years, and at Portland, Oregon, four years. In 1875 he commenced giving concerts, and as the celebrated McGIBENY family, his family has won high praise in all parts of America.

In 1870 James was working as a professor of music in Winona, Winona County, Minnesota. In 1880, the family was performing in various locations as a musical troupe, and as this report from the Friendship Chronicle reports, they were very well received:

While such talented and productive couples as Mr. and Mrs. McGibeny, parents of the wonderful musical prodigies, the McGibeny children, continue to make their periodical contribution to art and to the population there can be no reasonable ground for any dry of decadence in this country. This worthy and talented couple have surrounded themselves with olive branches from which leaves of music bud forth it would seem spontaneously. It is truly a most interesting family circle or to use another simile we might compare it to a flight of steps up the temple of St. Cecilla. The appearance of the nine McGibenys on the stage is so pleasing and homelike that it is impossible not to feel attracted towards them as one is not usually attracted towards them as one is not usually attracted towards ordinary musical or dramatic troupes. The nine range in regard to age from Florence who has attained six years to the Professor who has just passed two score and five. There are four others in various stages of preparation to be added to the nine. These are “Doc” aged 5, Grace 3 1/2, Carl 2 and Jamie 6 months.

Of the musical and other performances of the nine we need say little. There is a novelty and a freshness about all they say, sing, play or do that is most pleasing and entertaining. It is not to be wondered at that they almost invariably attract large audiences. On Tuesday night Academy Hall was overcrowded although this was their third appearance here. They performed here under auspices of Mr. J. B. Goodliff of Wellsville who is establishing an enviable reputation as an amusement manager for this section of the State.

According to the 1900 U.S. census, James and Hannah had thirteen children, twelve who were still living in 1900. I found a picture of the family in the Charles Levenson online photo galleries (see photo above), but I would like to know who the individuals are in the picture. I would also like to find additional information and pictures for this family.