Over the past few years I have enjoyed spending a few hours each week doing INDEXING and ARBITRATION for different Family Search projects. If you have not been involved in this wonderful effort to make records more accessible through digitization and indexing, you really should take the time to get involved. There is one feature of the program, however, that for me has become both a "blessing and a curse," to quote Adrian Monk. This is the ability to review the arbitration of the batches that you have indexed.

Now, I know there are a lot of terrific arbitrators out there who do a great job. They have to make tough decisions as they arbitrate and sometimes the decision does not go my way. I am perfectly fine when this happens, because I am an arbitrator too. I know that at times you just throw a coin in the air and choose heads or tails when it's impossible to decide between two very good possibilities. That's why they pay arbitrators the "big bucks" (ha ha) – they have to make difficult choices sometimes.

What I don't appreciate, however, are the few arbitrators who simply plunge into the job without reading the instructions or without using their brain. To illustrate, let me give you a few examples.

This past summer as we indexed and arbitrated the 1940 US census, one of the common problems was with the three columns labeled at the top with the question "Where did this person live on April 1, 1935?" The indexing instructions were clear on what to do:

"If 'Same house' or 'Same place' or some abbreviation of those terms, such as 'SH' or 'Same H,' was entered in any of the three residence columns for April 1, 1935, then mark this field [columns 18 & 19] as blank, even if a place-name or some other term was recorded in this column."

Those were the instructions, but several arbitrators chose to ignore this. Here is an example where 'same house' was written in column 17 and New York in column 19. The instructions were to mark column 19 as 'blank', which I did. The arbitrator, as you can see below, chose to put 'New York' in the column, however. 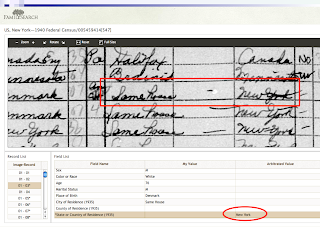 Another, probably more important issue, is that some arbitrators do not seem to believe in RECORD MATCHING. One of the first things I learned as an arbitrator was to scan down through both the A and B indexed records to see if they matched up. If one of the arbitrators had missed a line or two so that some of the indexed records were not aligned, then I, as the arbitrator, was supposed to fix the alignment BEFORE I started arbitration.

The worst example of an arbitrator not performing record matching happened to me this summer on one of my indexed batches of the 1855 New York State census. The batches usually came with 90 names (two pages of records). Occasionally, a batch would come up with only 45 names (one page). The form for data entry, however, was still expecting 90 names. When this happened, most indexers would simply fill in the first 45 data lines and leave the last 45 blank. Sometimes, however, an indexer would leave the first 45 blank and fill the data in the last 45 lines. The instructions from Family Search did not specify a particular way to enter these one page images.

This is not a problem for an arbitrator who does record matching. The arbitrator simply lines up the 45 lines from each indexer before beginning to arbitrate. Well, on one of my batches, the arbitrator chose to not do record matching. Therefore, when he/she did the arbitration, he/she arbitrated filled data lines from my batch with blank lines from the other indexer and then blank lines from my batch with filled data lines from the other indexer, ignoring the fact that all the data was there from both indexers. It just wasn't lined up properly. My arbitration score on the batch was, as you can imagine, not very good – less than 20%. I got credit for the header data that was about it.

I have more to say on these issues, and will continue this on additional blog entries. Hope you'll come back for more.
Posted by Urthman at 9:46 AM