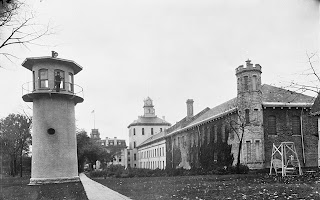 John Abel "Jack" Wight was born on the 1st of March 1889 in the Township of Alabama, Genesee County, New York, the first son and first child of Noah Wight and Ida May Ackerson. Noah was an apple farmer and worked 50 acres of land that he leased from Ida's father.

Jack's life as a young boy was probably like many other boys in the farming country of western New York. He would have needed to help his father on the farm and yet would likely have had ample opportunity to be a boy. There is no indication in any of the local papers that Jack was a troubled youth.

In 1910, Jack was living at home, but working as a fireman for the railroad and by 1915, at the age of 26 years, he had left his family farm in Alabama Townsip and was living in the big city of Buffalo. He registered there for the draft during WWI, but Buffalo couldn't hold him. We don't know for sure, maybe it was the sudden death of his father, or perhaps he could not find the kind of work he wanted there, or perhaps it was still too close for comfort to the family farm. For whatever reason, Jack moved on and found a young Scottish immigrant, named Anna with whom he fell in love. Anna was a couple of years older than Jack, born about 1887. They were married sometime before 1920 and moved to Norwalk, Huron County, Ohio where he found employment as a garage mechanic. For whatever reason children did not come to the young couple. Still, I imagine that they were mostly happy with no more than the usual problems that arise in a marriage.

But life moves on. Ohio was not the final stop on Jack's road. Sometime in the early 1920's, he and Anna moved to Flint, Genesee County, Michigan. It was here in Michigan where life began to really take its toll. First, in 1927, Jack's mother, Ida May, died on the 18th of February. He traveled back home for the funeral, but his ties to family were now weakened. Then in October of 1929 the world economy collapsed. Jobs were so hard to find. Jack was one of the millions out of work. He may have always had a drinking problem, we don't know, but during this period of his life, there is little question that he began to drink more, and drinking did not make him a happy man.

At home, Anna must have tried to hold things together. Somehow they eked by until Jack was given work with the WPA, the government's answer to the rampant unemployment of the Great Depression. But employment through the WPA, although a godsend for many, was also hard on a man. He was a second class citizen, a government supported drone who couldn't make it on his own.

Still, no matter what the problems, they did not merit the events that followed. On the 10th of January in 1939, Jack came home drunk. Anna was understandably upset and would not talk to him. Here he was spending the few dollars they had on liquor. Jack berated her and undoubtedly placed much of the blame for their troubles onto her. She still refused to talk. In his drunken state, probably not realizing exactly what he was doing, Jack proceeded to pour kerosene over Anna. He then threw a lighted match into her lap setting her on fire. It appears at this point that Jack realized what he had done and called for help to put her out. Anna, however, was severely burned and died one or two days later.

Jack was arrested and convicted of second-degree murder and then sentenced in April 1939 for a term of 25 to 40 years in the Southern Michigan State Prison in Blackman Township, Jackson County, Michigan. “Michigan State Prison or Jackson State Prison, which opened in 1839, was the first prison in Michigan. The first permanent structure was constructed there in 1842. In 1926, the prison was relocated to new building, and soon became the largest walled prison in the world with nearly 6,000 inmates. The prison was renamed the State Prison of Southern Michigan in 1935.”

Life in prison is tough. But life after prison can be even tougher. Jack was released from prison in the mid-1950s and moved to Texas where he found work as a dishwasher at a cafe. He had been in Texas for only about a year, however, when he died at his home on 2518 Seevers Street on 26 March 1956 in Dallas of asphyxiation due to an open burning stove in his apartment; the death was officially determined to be an accident, but the circumstances suggest that it was more likely suicide.

I recount this story here because John Abel Wight is my cousin, my 4th cousin 2 times removed to be exact. We both descend from the same man, David Dewers (or Duers), a ship master who lived in Dartmouth, Massachusetts. I hope that somewhere David is putting his arm around his great-great-great-great grandson and that, even for Jack, there will be redemption. 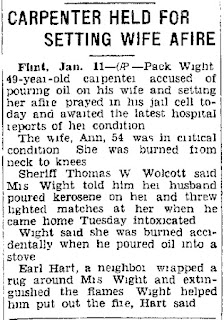 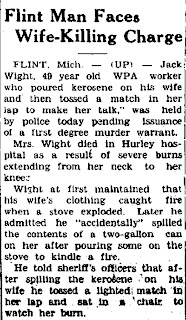 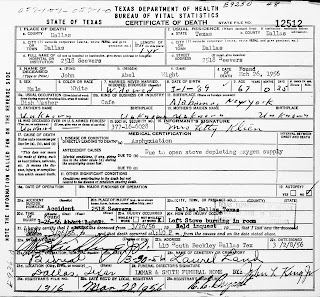