THE LAST YEARS
In 1902 and in 1903, James H. Wallick, in addition to managing Eleanor Merron’s plays tried to revive his most successful play, The Bandit King [119], but the revival was a short one and audiences were apparently tiring of the genre. In the years after Mary Wallick’s death, James boarded in Middletown with Eleanor and Archie Cowper, who had moved there after Archie became blind in 1896. [120] James briefly owned Hollyrood Farm again when he purchased it from Moses Crow’s widow, Elizabeth in 1903. [121] He sold the farm to his attorney,  William B. Royce in 1905. [122] Archie died in 1906 and following his death James purchased a large home in Middletown––a fine house called the Thistles––where he and Eleanor resided until the property was lost due to mortgage foreclosure. [123] At that point, both he and Eleanor took rooms at the King Edward Hotel in New York City.

Was there more than just friendship between James and Eleanor? There are no reports of any impropriety or any intimacy between them, but for several years they were almost inseparable. James, born in 1843, was fifteen years older than Eleanor, who was born in 1858 [124], both still young enough after the death of their spouses to have had a romantic relationship. Still, it may be that they just found in each other a “kindred spirit,” someone who had experienced the exhilaration of audiences enthralled by their performances, as well as the melancholy brought on by harsh reviews and rejection of new ideas. Whatever it was that brought them together, the combination turned out to be deadly.

It was while they were both living at the King Edward Hotel in New York City that they discussed their failing fortunes (both in terms of money and success) and James failing health. They had both lost long-term companions, something that must have weighed on them deeply. There were no more hit plays on the horizon and for both of these individuals, life seemed to have lost any meaning. James and Eleanor spoke often about suicide during this time and, in April 1908, agreed that it was time to carry out their plans. [125] They were to both take their lives on the first of May at the same time and in the same manner, but in different locations to avoid any unpleasant notoriety. [126] James left New York City and went to Middletown where he took a room in the Commercial Hotel and carried out his part of the agreement on the first of May. [127] But Eleanor delayed. She wanted to make sure James was properly taken care of. He was buried in Middletown in the Hillside Cemetery and the only service performed at his burial was by Eleanor, who read some poetry. [128] The details of what happened in the months following and of Eleanor’s own suicide in November of the same year were reported in hundreds of newspaper articles published across the country. The Ocala Evening Star, for example, reported it as follows:


Middletown, N.Y., Dec. 4––Details of a suicide agreement that existed between Mrs. Eleanor Merron Cowper, the playwright and actress who shot herself at the Hotel St. Regis in New York on Friday and died Monday in the Presbyterian hospital, and James H. Wallick, the actor-manager, who shot and killed himself at the Commercial hotel in Middletown on May 1, became known today through the publication of letters which Mrs. Cowper wrote just before her death.
From Mrs. Cowper’s statements in various letters which are in the hands of her attorney, Special County Judge H. B. Royce of Middletown, it is evident that Mrs. Cowper and Mr. Wallick as long as a year ago contemplated suicide and that both decided to die in the same manner. In one letter Mrs. Cowper says that she and James H. Wallick had often talked over the matter of taking their lives and had agreed that each would do so. While no definite time was set it was agreed that should they come to feel that the world had no further attractions for them they would leave it at the same time and in the same manner.


In April last, while Mrs. Cowper and Mr. Wallick were staying at the King Edward hotel in New York, Mr. Wallick broached the subject of suicide again. His fortune gone and suffering from illness, he made up his mind that life had nothing for him. Mrs. Cowper’s financial affairs were also in bad shape, and while she had enough to live on she felt that with the death of Mr. Wallick, her closest friend, she could find no pleasure in life.

The suicide agreement was made and they were to take their lives on May 1, 1908. In order to avoid unpleasant notoriety, it was decided that Mr. Wallick should come to Middletown to do the deed and that Mrs. Cowper should remove from the King Edward hotel to the St. Regis and there take her life.
In the last week of April Mr. Wallick bade Mrs. Cowper farewell at the King Edward hotel and came to Middletown. He shot himself in the right temple in a bathroom in the Commercial hotel in this city on the morning of May 1. Instead of taking her life at the same time as agreed, Mrs. Cowper remained at the King Edward and awaited the news of Mr. Wallick’s suicide, deciding that she should personally attend to all the details of his burial and later take her own life. She was deeply affected when she received the expected word that Mr. Wallick had carried out his part of the compact. Then Mrs. Cowper proceeded to put her affairs in shape for her death. She postponed carrying out her part of the agreement from time to time, however, not from reluctance of fear, but because she could not arrange a time for the act that would not interfere in some way with some one’s plans. In particular she did not wish to interfere with any plans her attorney, Judge H. B. Royce, had made, as she wished hem to look after her affairs and burial.


She continued to postpone the event but made up her mind fully to do the deed on the day after election. Then she learned that Judge Royce was contemplating a pleasure trip at that time and again she postponed taking her life.

In one of the letters she left she said that she had not had any big time since July but that she “celebrated the day after election as every good patriot ought. I have no grudge against the world and I intend to go in good health and spirits.”

The last letter which Mrs. Cowper wrote just before she shot herself and which she sent to Judge Royce by special delivery, is one of the most remarkable ever left by a suicide. In it she talks cheerfully of her death and avows her belief that there is no future world. [129] 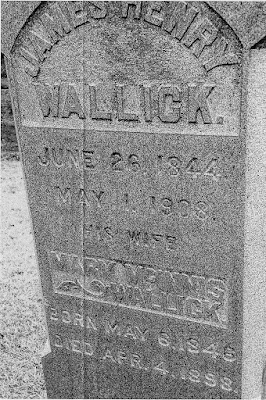 JACOB WHEELER (possibly the father) was born about 1818 in New York and was unemployed at the time of the 1850 U.S. Census. [130] Jacob appears to have either died or deserted his family by 1860. The mother was SUSAN (perhaps ELLSWORTH or WHEELER). Susan was born about 1817/1820 in New York and died on 5 November 1898 at Rondout, Ulster County, New York; she was buried in Hillside Cemetery, Middletown, Orange County, New York. [131] Her gravestone lists her name as Susan Wheeler Ellsworth. [132] Susan was working as a domestic servant in the Jeremiah Ten Broeck household of Saugerties, Ulster County, New York in 1870. [133]
Jacob (perhaps) and Susan had the following children:

i.    Henry Wheeler (a.k.a., Patrick J. Fubbins or James Henry Wallick) was born 26 June 1844 in Hurley, Ulster County, New York. [134] James was married on 22 August 1867 in Knox County, Illinois to Mary McInnes (or McGinnis or McKenzie), who was born 6 May 1846 perhaps in Galesburg, Knox County, Illinois and died on 4 April 1898 in Middletown, Orange County, New York. [135]
There are no known children for this couple, although one newspaper report suggested that they had adopted Mary’s niece, Eleanor Merron. [136] This seems to be incorrect. No connection between Mary and Eleanor has been found and other newspaper accounts indicate that Eleanor and her husband Archie Cowper became acquainted with James and Mary Wallick in about 1897 when Eleanor began acting in Wallick’s plays. [137]
Another newspaper account suggests that James and Mary Wallick adopted his niece, Violet Barney, who married Mr. Williams; Violet supposedly lived with the Wallicks in Middletown or on Hollyrood farm and attended the Ursuline Academy. [138] I have been unable to verify this report.

ii.    Matilda Wheeler was born about 1847 probably in Hurley, Ulster County, New York. [139] She was working as a domestic servant for the Solomon and Sarah Crispell family in Hurley in 1865 and for George and Sarah Wynkoop, also in Hurley, in 1870. [140] Interestingly, the Wynkoop household is listed right after the John Elmendorf family. It was the Elmendorfs who took in her brother as a young boy. In 1880, Matilda was employed as a cook in the Mahaleth Floyd household in Shandaken, Ulster County, New York. [141] Matilda apparently married a Mr. Delemater, but I have been unable to find her with him in any records. [142] She died on 6 November 1899 and was buried with her mother in the Hillside Cemetery, Middletown, Orange County, New York. [143] 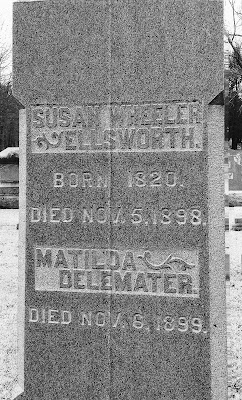