I think all of these stories could probably have been told much better by another of my cousins. His name was Louis Dearborn LaMoore. Louis was the grandson of Abraham Trefethern Dearborn and before I tell you about Louis, I want to tell a little of the story of Abraham.

Abraham was the only child of William Seavey Dearborn and Frederica Garic. He grew up in a troubled home and his parents separated or divorced in 1842 while he was a young boy of about 4 years of age. The troubles of this family are described in detail in a book written by Edna (LaMoore) Waldo. Abraham lived with his father after the separation, but his father, William Seavey Dearborn, died, presumably, under mysterious circumstances while the family was living in Susquehanna County, Pennsylvania. According to Yet She Follows, 125-26, “just before starting off on a long trip to market with a drove of fat cattle, William, it is supposed, stopped to see his estranged wife Frederica; had he returned, there might have been a reconciliation. But, accompanied by two hired men, he went to the market town, several days away through a thickly wooded country, sold and paid for his cattle, and disappeared. Neither he nor either of the men was ever heard of again and the supposition was that he had been killed for his money.” His son Abraham was thereafter raised by his grandparents and by his Aunt Eliza Jane Angeline Dearborn (my great-great grandmother). 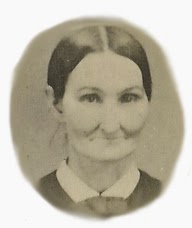 Abraham T. Dearborn moved in the 1860's to Todd County, Minnesota near his Aunt Eliza Jane and her husband, Lawrence Alonzo Chamberlain. After the Civil War began, he enlisted at Fort Snelling, Minn. as a sergeant into Co. G, 3rd Minnesota Infantry. From a history written by my cousin David Curtis Dearborn of this family we learn that, "The 3rd Minnesota Regiment was sent to Fort Halleck, Kentucky to serve on the western front which, by all accounts, suffered from confusion, changes of command and poor morale. At the Battle of Murfreesboro (Tenn.), 13 July 1862, the regiment surrendered without a fight, and A.T. and his men were captured. Part of the regiment, including A.T.’s company, was paroled two days later at Warren County, Tenn. back to Minnesota to help put down the Indian uprising. Because the regimental officers were not among those released, A.T. was put in command of Co. G. At Fort Abercrombie, Dakota Territory, on about 30 October 1862, he received a superficial gunshot wound to the right leg. It was on this campaign that he met his future father-in-law, Capt. Ambrose Freeman of the 1st Minnesota Mounted Rangers. By May 1863, A.T. was back in Tennessee, where records show that he was thrown from his horse at Island No. 10. He was discharged from the service on 2 July 1863, suffering from chronic diarrhea and general prostration. He did not remain inactive long. On 28 October 1863 he re-enlisted as a first lieutenant in Co. G, 2nd Tennessee Colored Heavy Artillery. He was again stationed at Fort Halleck, Ky., and saw little action during the rest of the war. Records in his pension file show, however, that on 5 March 1865 he received a wound to his left forearm and a severe wound to his right middle finger. He also suffered from acute bronchitis, rheumatism and remittent fever, not unusual symptoms for a soldier in the field.

I like to think that my great-great grandmother Eliza had some influence on Abraham and helped him to grow into the strong, adventurous man he became. Yes, Abraham had an interesting life and perhaps some of that may have may have been passed down to his grandson, Louis.

So why is it that I think Louis, my 3rd Cousin, once removed, could have told all of these stories much better than I can. Well, Louis, it turns out, had a flair for writing. By the time he finished his career, he had written 89 novels, 14 short-story collections, and two full-length works of nonfiction. As of 2010, his books and stories had sold more than 320 million copies, had been translated into a dozen languages, more than 35 films and TV shows were produced from his books, and he helped to pioneer the use of audio tapes for books.

Louis died in 1988 before I discovered that we were fairly close cousins. I would have liked to have met him. Although he was born a LaMoore, as a young man he decided to change his name from Louis LaMoore to Louis L'Amour. The name L'Amour was probably the original family name anyway since the ancestry on that side of his family is French or French Canadian.

Very few writers can claim a wider readership or a more successful career than Louis. He once said, "There have always been hard times. There have always been wars and troubles–famine, disease, and such-like–and some folks are born with money, some with none. In the end, it's up to the man what he becomes, and none of those other things matter."

Yes, I would have liked to meet Louis and I think I am going to have to read a few more of his books. 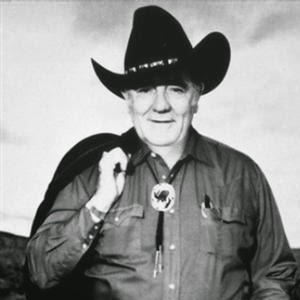 Photo of Louis L'Amour from his Wikipedia page.
Posted by Urthman at 8:32 PM