LDS Servicemen and Women in Okinawa 1945 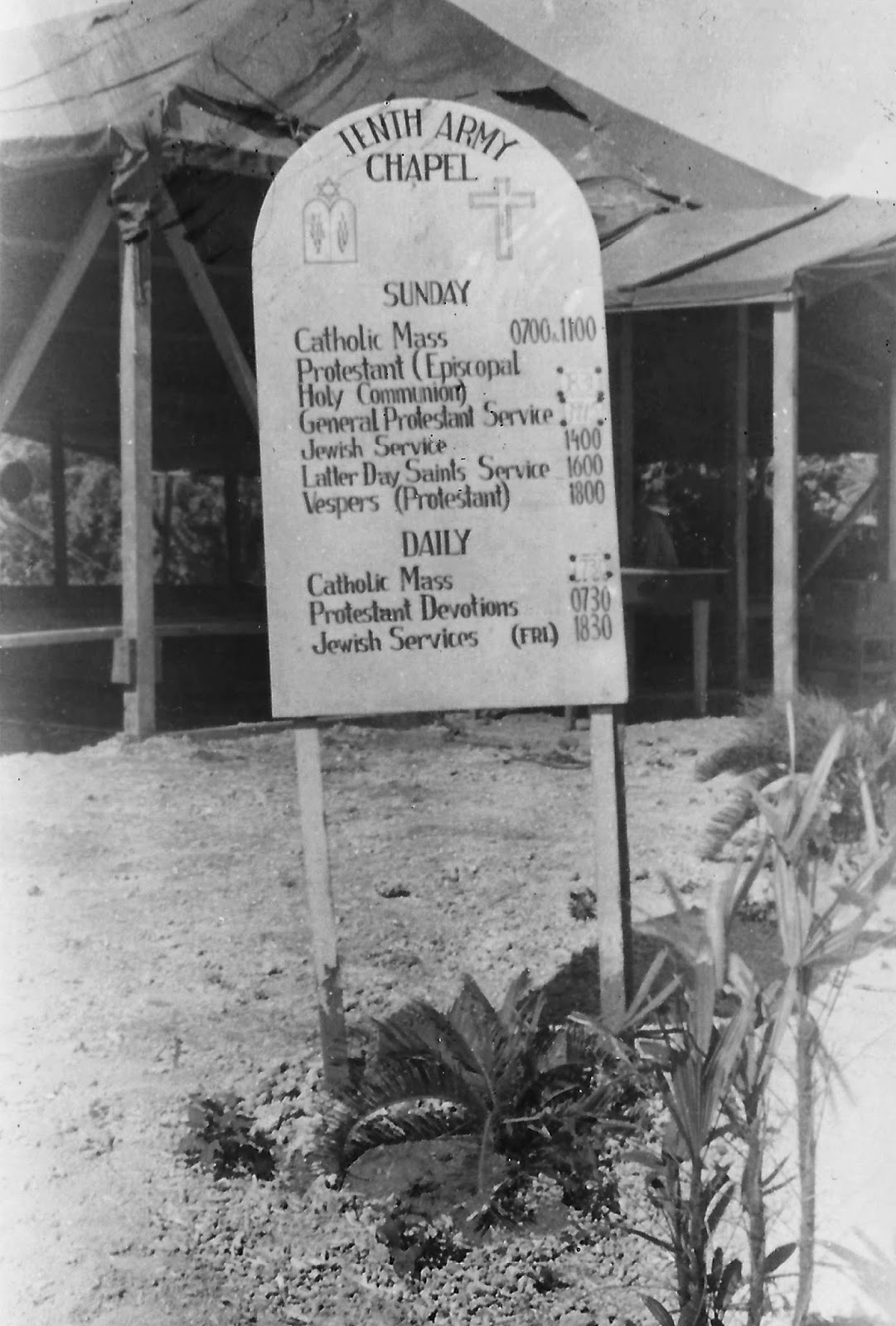 Tenth Army Chapel used by several different religious groups including the Latter-day Saints group to which Lieutenant Reinhart T. Kowallis belonged.  Among the photos taken by Lieutenant Kowallis were a number of friends and acquaintances he met at church. He mentions some of these in his letters home to Norma.

On the 8th of July, R.T. wrote, "Today conference was held down at the 24th Corps, and it was realy an inspiring meeting. We had 287 present among which were five L.D.S. chaplains. I wanted to get a program to send you but they were all gone before they got back to me, but I can tell you what we had. After the sacrament was passed the quartette sang “See The Mighty Angle flying.” They were realy good to. Then Chaplain Smith spoke followed by Chaplain Jones. Then another number by the quartet, “My Prayer,” followed by a talk by Chaplain Widdeson. It had been a long time since I felt the spirit of God as it seemed to be present today. The meeting was held in the shadow of the historic Nakagusuku Castle of which I will write you more later when I develop the pictures I took of it." 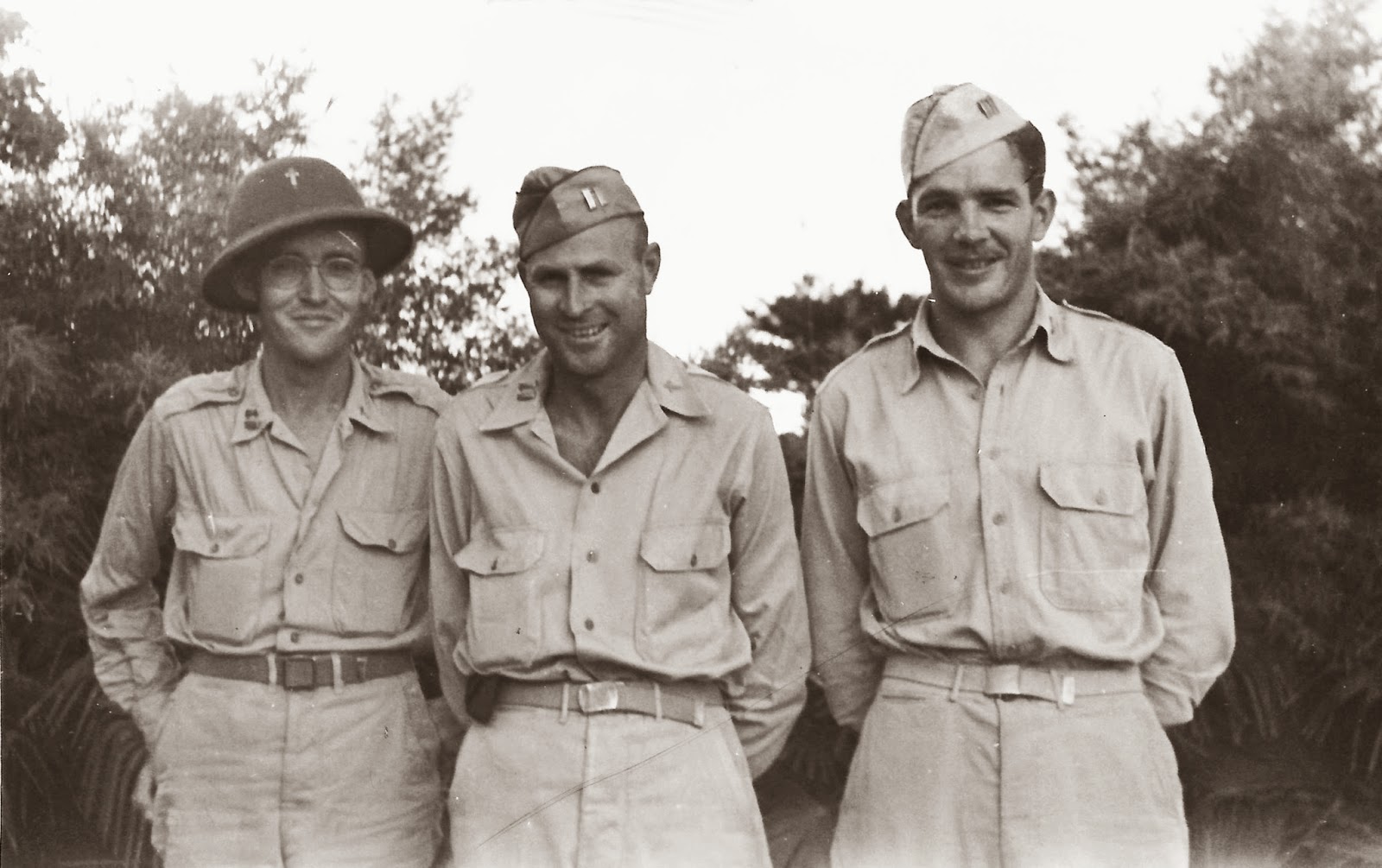 Here are three of the five LDS chaplains: (left to right) Jones, Evens, and Widdeson.

On the 24th of July, Lt. Kowallis explained in his letter home that, "We only have about 300 yards to go to church so we can always get there. Every Sunday there are about 40 or more present. We have some very good meetings."

Reinhart had an old LDS buddy from his school days at the Utah State Agricultural College with him on Okinawa, Ray Hales. Although I have not been able to positively identify any photos of Ray taken in Okinawa, he is mentioned frequently in Reinhart's letters and below is a photo of him from the College yearbook. 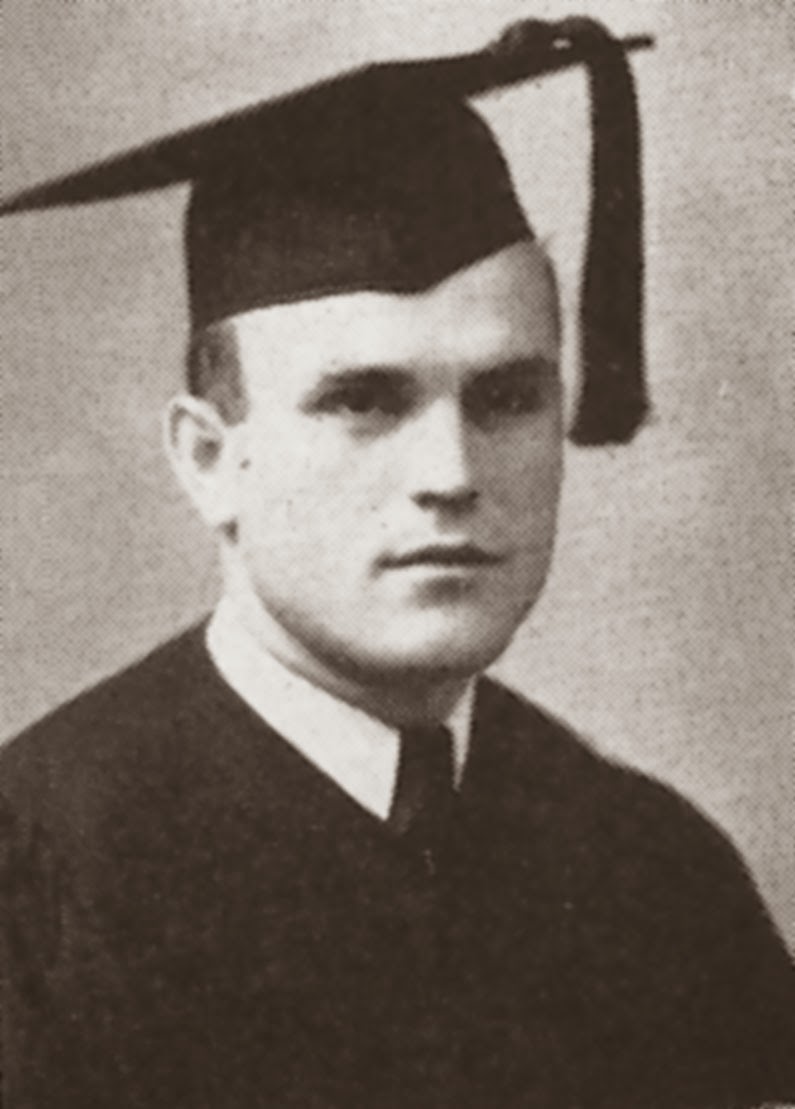 Ray Hales of Spanish Fork, Utah in a photo from the The Buzzer (1938), the annual yearbook published by the student association at Utah State.

On the 29th of July Reinhart wrote this in a letter home, teasing Norma about some LDS nurses he had to pick up for church: "Ray got a call from one of the Chaplains this morning asking him to drop down to one of the hospitals and pick up a couple of nurses who want to come to church. Ray wasn’t allowed to go so he asked me to take his place. I just hate to do it you know, but it is my duty, and when duty calls I must. But I promise to sit way to the back of the jeep and I won’t even move because there will be two nurses sitting on top of me. But I still won’t look at them. I’ll just keep looking around them until I see the church. That way I can tell when I’ll have to let go of my hold on em. Anyhow, I’ll be thinking how I wish you was them cause there is only one of you so you couldn’t be nearly as heavy!" 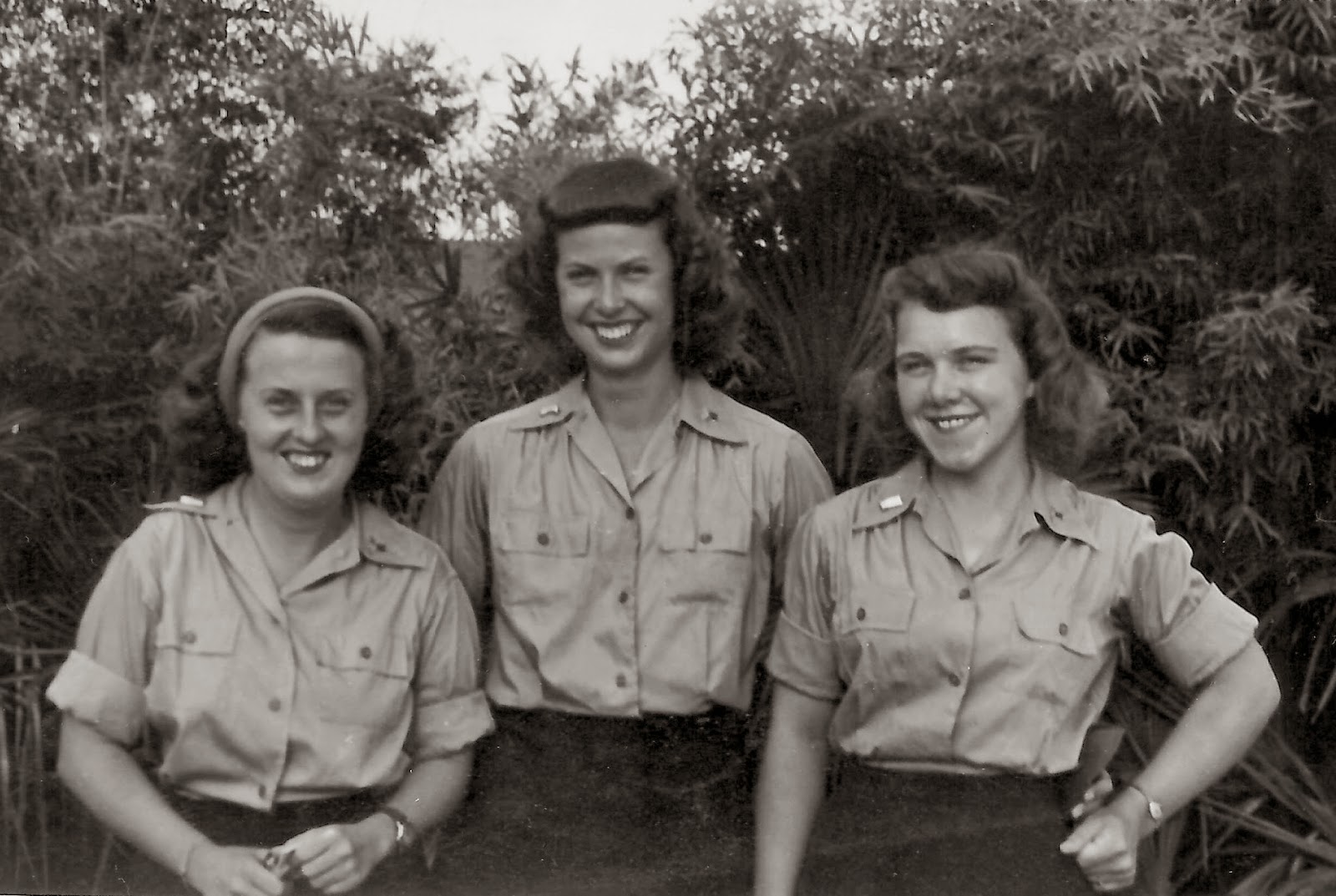 LDS nurses: Lieutenants Spry, Richardson, and Hyatt. Spry and Richardson were from Salt Lake City, Utah according to the notes on the photo and Lt. Hyatt was married. Lt. Spry met another LDS serviceman at church named Brown who was an old friend from Salt Lake (they are shown below). 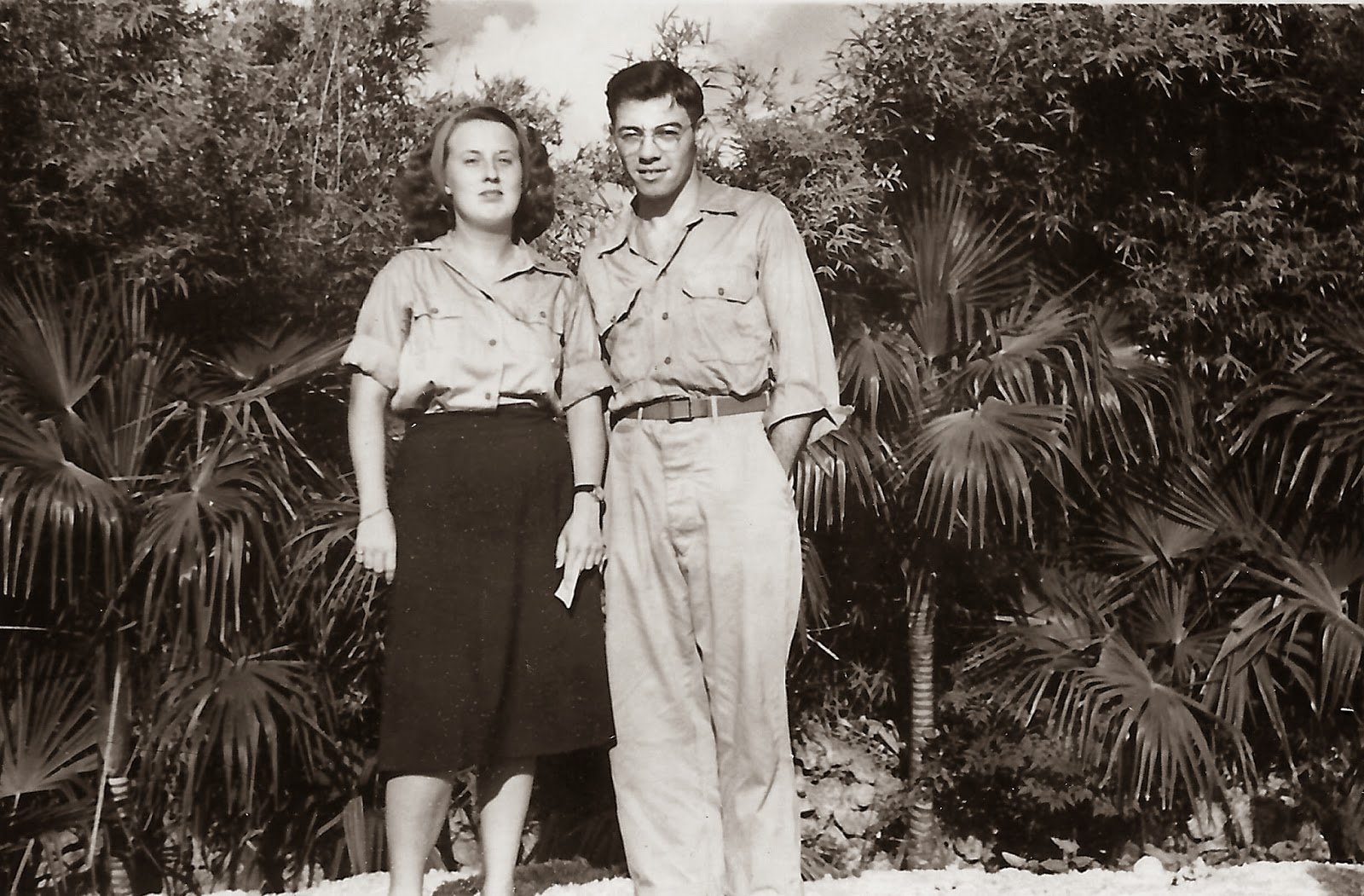 Here are a few other LDS servicemen in Lt. Kowallis' photo collection. 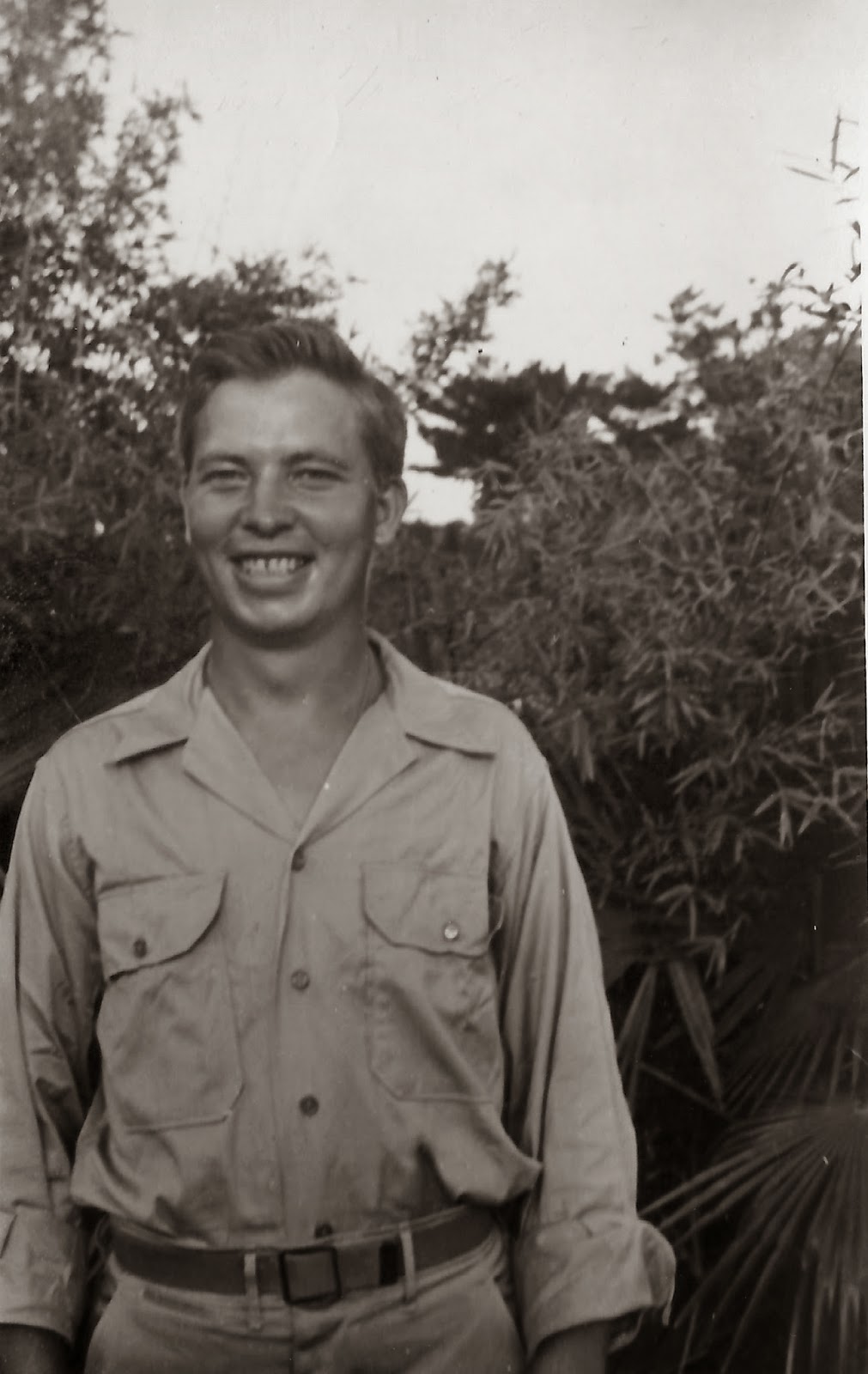 Brother Swensen in July 1945 on Okinawa. 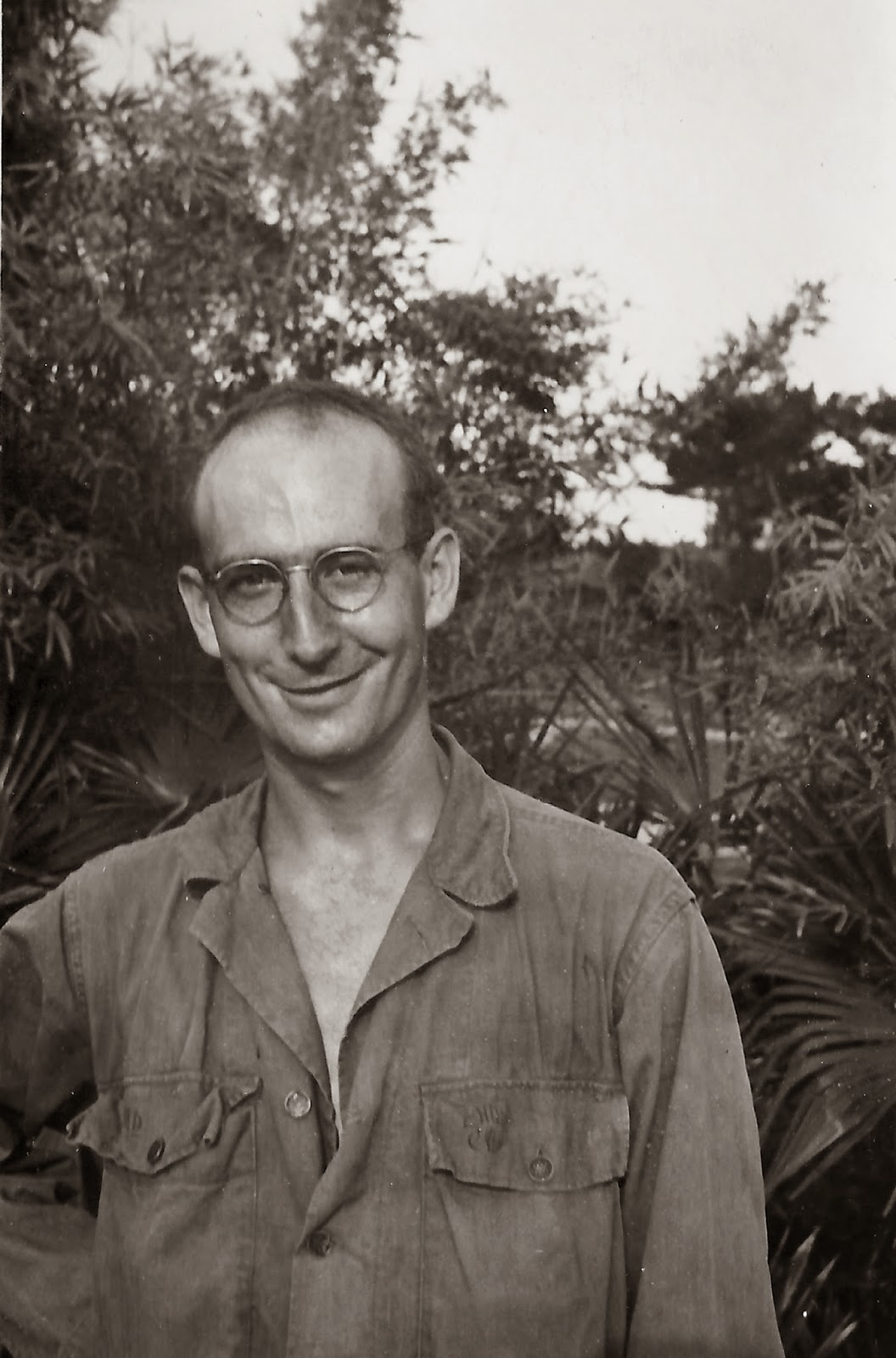 Brother Childs in July 1945 on Okinawa. 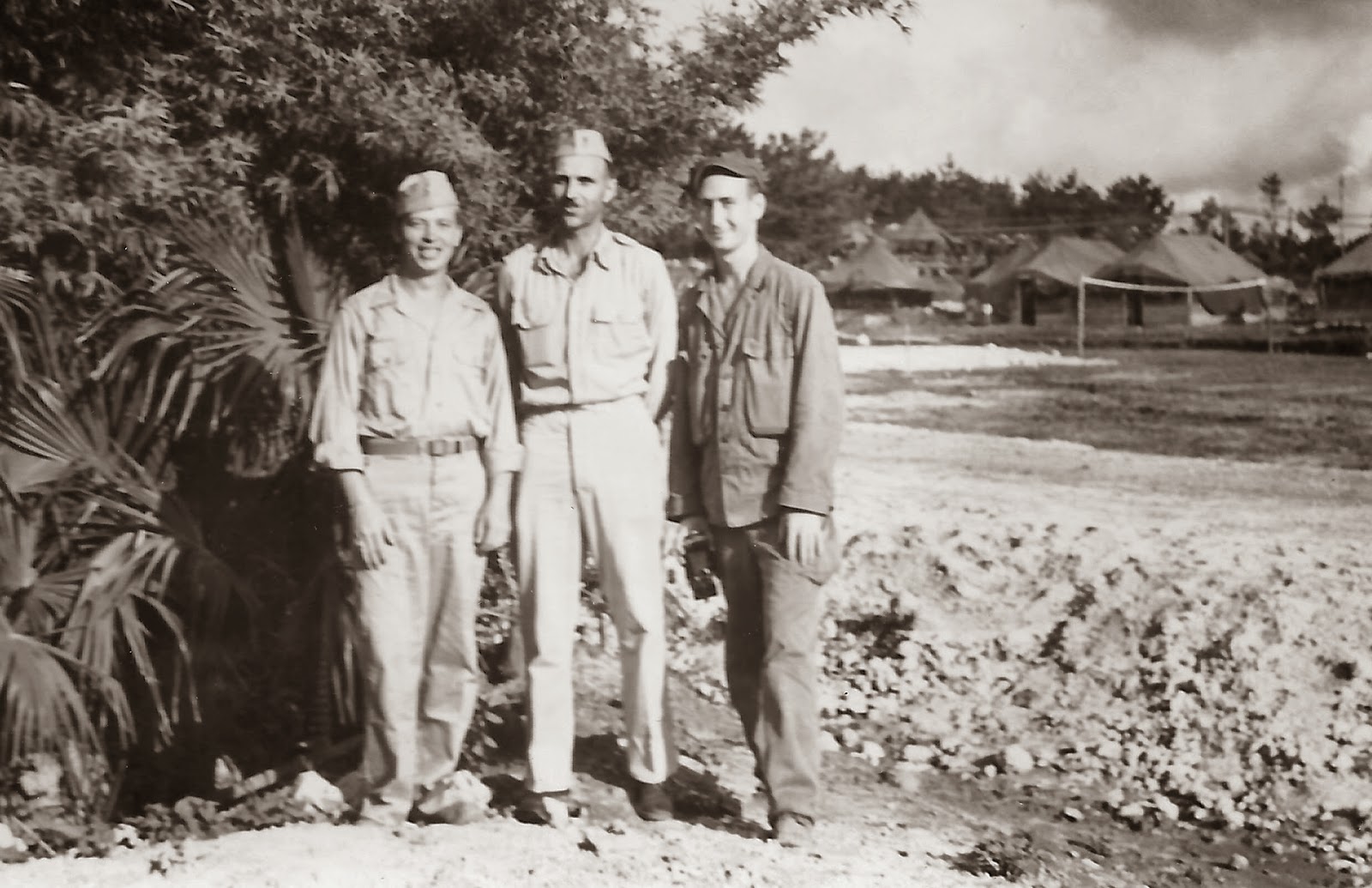 LDS servicemen Swensen, Zenger, and Childs on Okinawa in July 1945.

Later in August of 1945 Reinhart wrote this in a letter home to Norma: "Chaplain Widison brought some negatives over to me yesterday to print up for him. He is sending pictures of the cemeteries to the parents and relatives of our boys who were killed out here. The least I can do is print them up for him." Below is one of the cemetery pictures with two graves in the foreground that are likely LDS servicemen. Their names are R. L. Dunn and D. E. Smith. 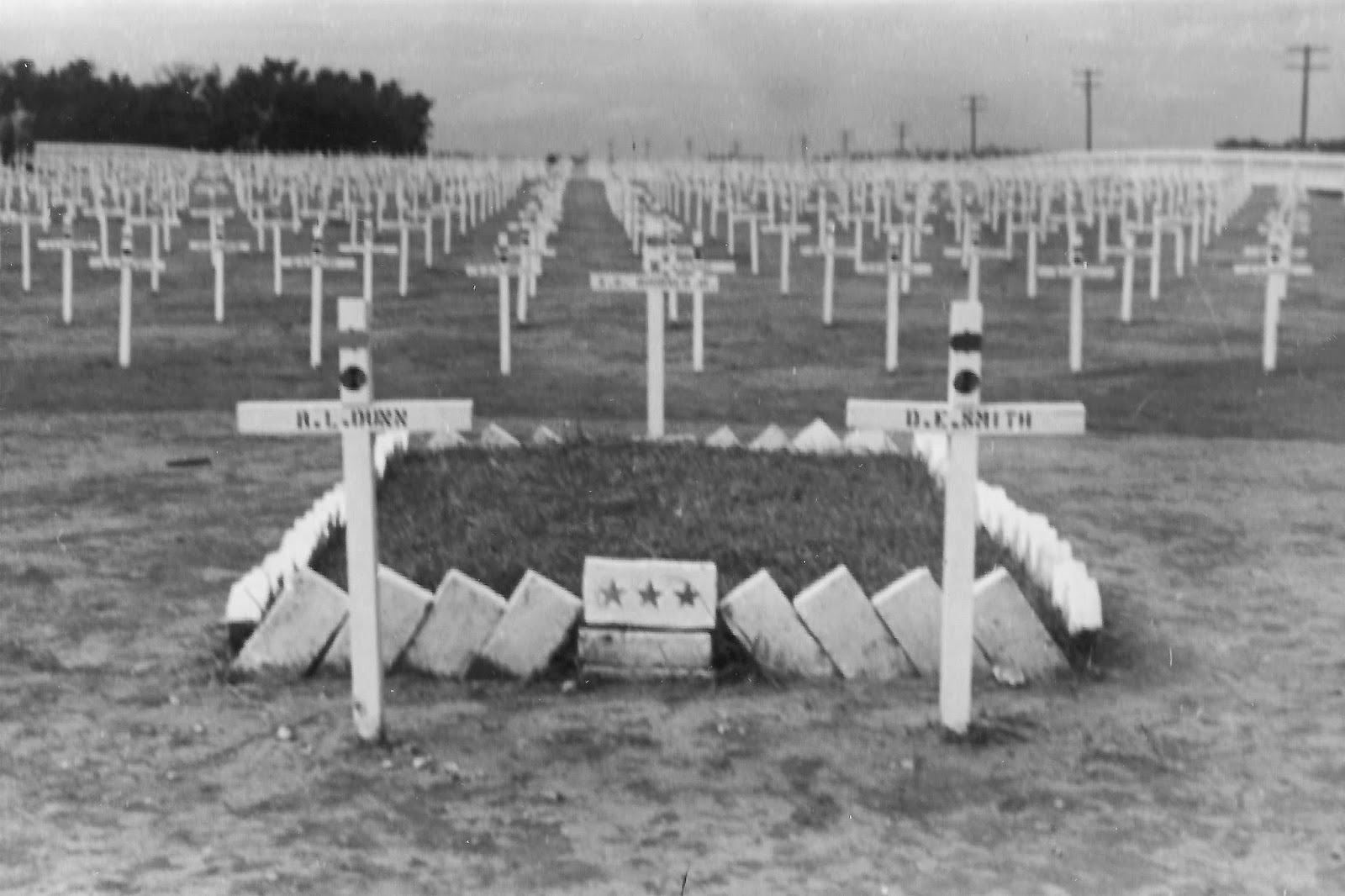 Lt. Kowallis did not just attend church, he was also asked on occasion to give lessons or lead discussions. He wrote Norma on 19th of August 1945 that, "Our meetings are growing each week. I think we had 79 out yesterday. But even so, out of all those people I have to give the lesson next Sunday. Now if only you had been here I am sure I could have swung it your way. It would be much easier for you to give it because just looking at you people would be satisfied without your saying a word." 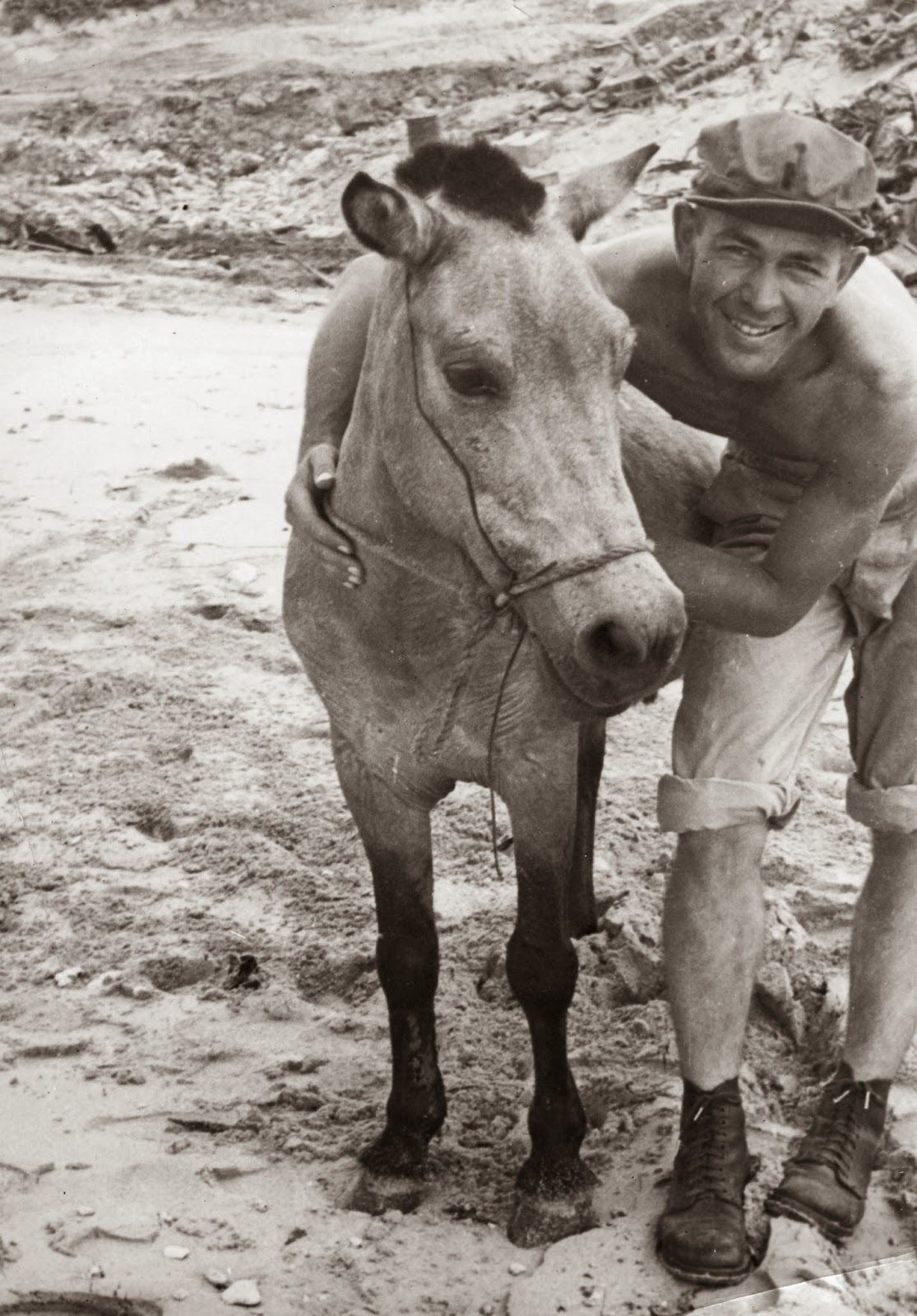 Lt. R.T. Kowallis having his photo taken with a small donkey on Okinawa in 1945.