Okinawa 1945: Capture of a Japanese Soldier 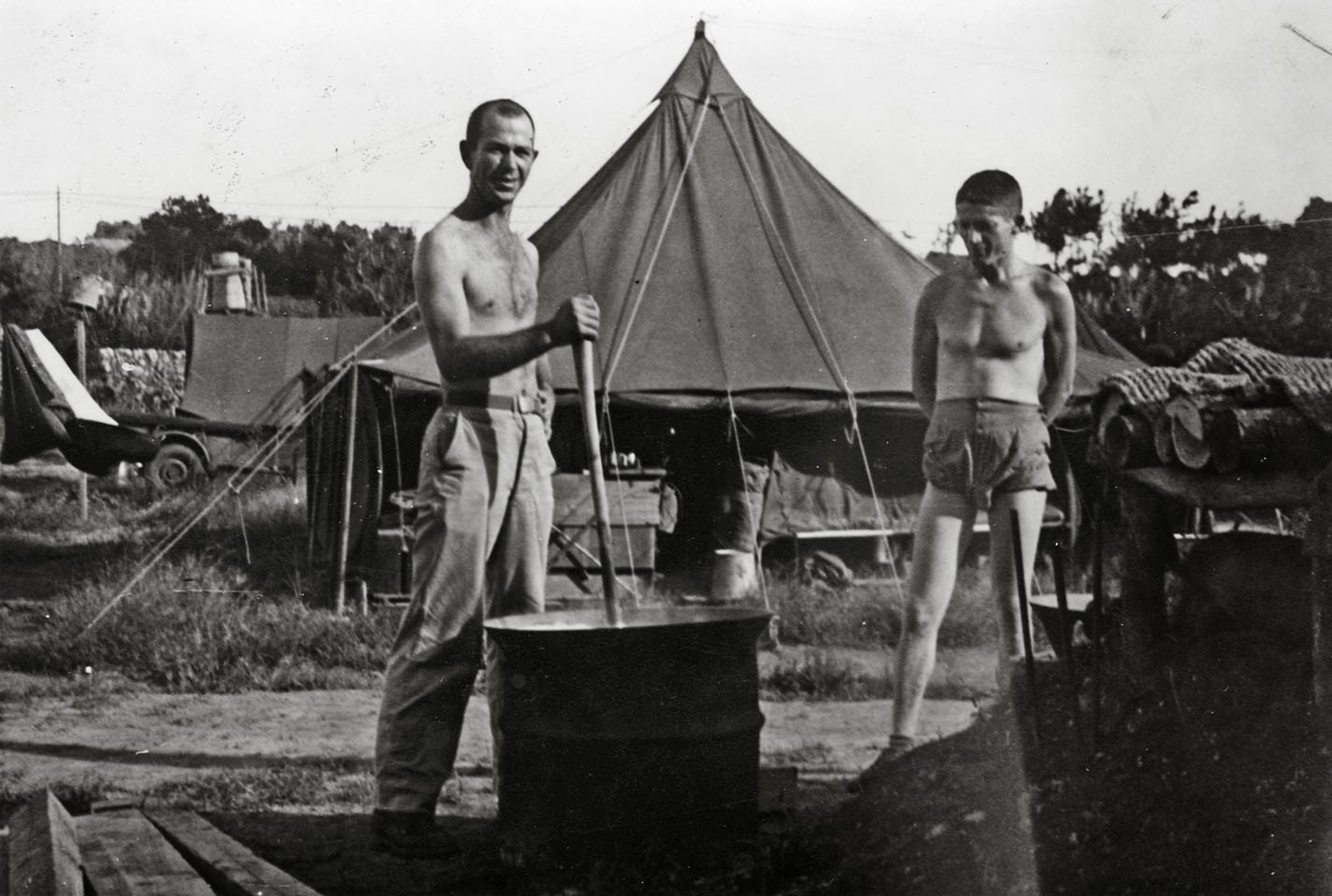 There were only a few occasions when Lt. Reinhart T. Kowallis (seen above stirring the hot water for his laundry) was not occupied with his photo team, but actually got out into the hills of Okinawa. On the 9th of July 1945, he was leading a group of men in helping to locate and remove Japanese soldiers from some of the caves on the south end of the island. The Japanese soldiers in these caves were cut off from any central command and were unaware that the fight for the island was over. Lt. Kowallis recounts this day in his letter home to his wife Norma.

Okinawa
9 July 1945
Dearest Norma,
What a contrast today has been from yesterday. Yesterday I went to conference, today I was down on the South tip of the island where the Japs still infest the country. We went down to check some Jap installations and caves. There were only five of us went down, but when we got down to the escarpment to be inspected we met a five man patrol out looking for Japs. They told us that the day before they had killed three within fifty yards of where we were standing. With us only five men it didn’t sound so good to be wandering around in the rocks by our selves, so we asked them to join us for a ways, which they did. We had not moved forward fifty yards until someone spotted a Jap ducking into a cave. We went up to where it was and one of the boys saw him duck out of sight. Twice after that some one saw his head come to the light and then disappear. We tried to get him to come out by calling to him, but he would not come so we threw a smoke grenade. The smoke came out of the ground in at least a dozen different places around us, but no Jap showed up. After the smoke cleared out a couple of the boys got down into the entrance of the cave, which was not very large, and shined their lights in. They could make out two Japs. One was lying under a blanket which had been set afire by the grenade. The other one we could only see his foot sticking out from behind a box. We didn’t know what they had in the way of weapons so no one would go in after them, which is a very unwise thing to do in any case. We kept talking to them although they couldn’t understand us. Finally I guess the smoke got too hot and heavy for the one under the blanket. We heard him coming and backed up so we could cover both entrances to the cave. He came on out very slow and cautious like, carrying a grenade in his right hand. We motioned for him to drop the grenade, which he did. As soon as he was in the clear, we cut off his clothing he had left on. He had no other weapon. He was pretty much afraid at first until one of the boys gave him a smoke. Then by means of sign language he told us there were still two more in the cave. We then got him to call to the others to come out with no results. When we tried to get him to go back in to get them, he would not, and again by means of signs gave us to understand they would kill him if he went back in. We kept trying for another half hour or so to get them to come out, but no soap. Then all at once out comes a grenade right through the entrance where we were standing. You never saw ten men take cover so fast in all your life as we did. At the same time the grenade went off outside, one went off inside. The Jap we had told us they had blown themselves up. We went down into the entrance once more, and could still hear someone moving, so we threw in three grenades. Our prisoner told us that in the cave to the right of us ten more Japs were hiding, and in a cave just a little to the left were five more. One of them he said was a captain, and he thot they had two machine guns. He also said in the cave he had come out of were about 200 rifles. We thot we had better get out of there while the getting was good, so we loaded our prisoner in the back of the Jeep and took off for camp. He was very cooperative all during this time, especially after he found out we weren’t going to hurt him. On the way up the coast his eyes almost popped out when he saw all the trucks, ships, & other equipment. We gave him a candy bar to eat on the way and he downed it in about two gulps. He had been making signs to tell us he was hungry and I guess he was, in spite of the fact that he was in excellent physical condition. We brought him right up to the G-2 section so the boys couldn’t help but believe our story, then we turned him over to the MPs. He was very grateful for what we had done, and when we left him, he gave us a big smile and sort of half saluted.
I guess this story should do for tonight, but don’t go worrying because I’ll be as careful as I can. I don’t go on the trips for enjoyment but because I have to.
All my love to you,
Reinhart

Here are the photos of the caves and of the Japanese soldier they captured. 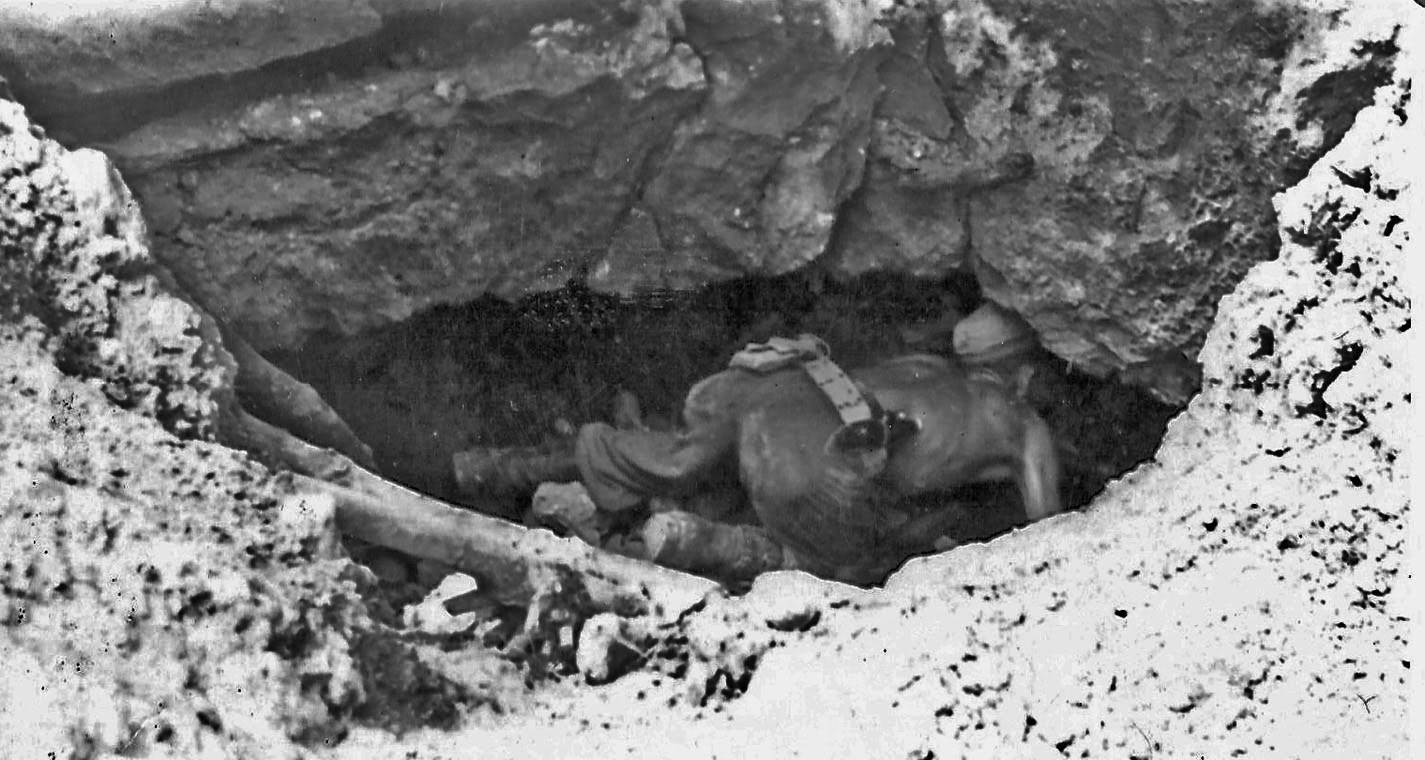 One of the team trying to talk to the Japanese soldiers in the cave. 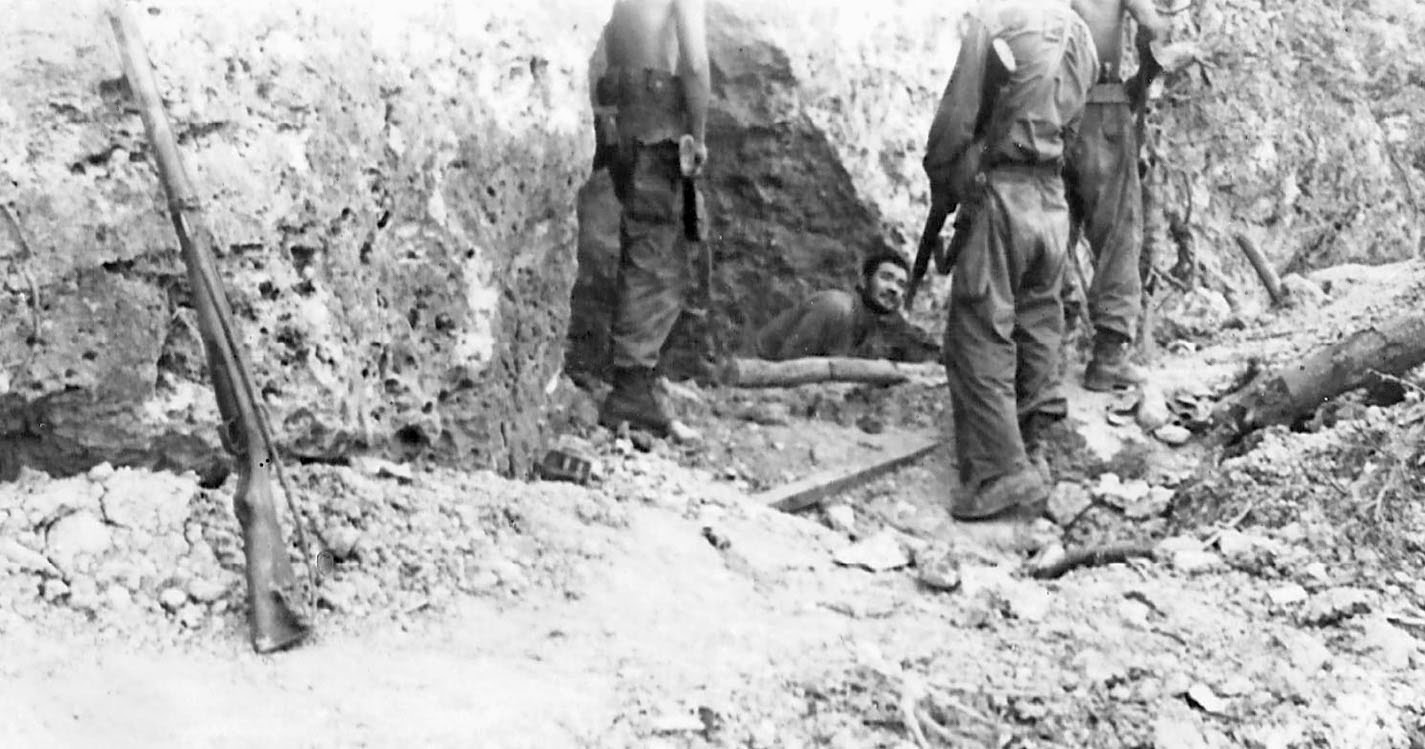 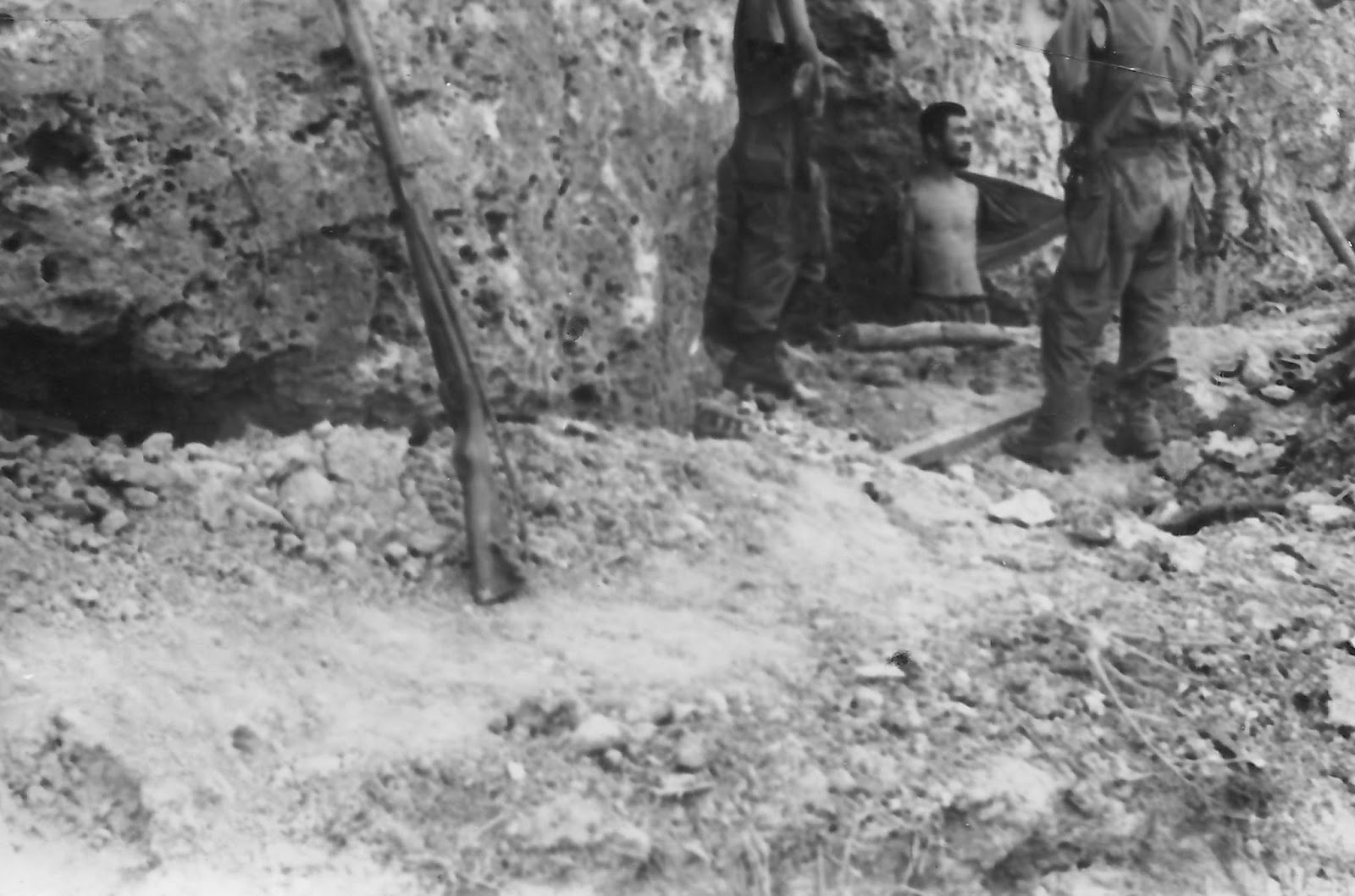 One soldier emerges from the cave. 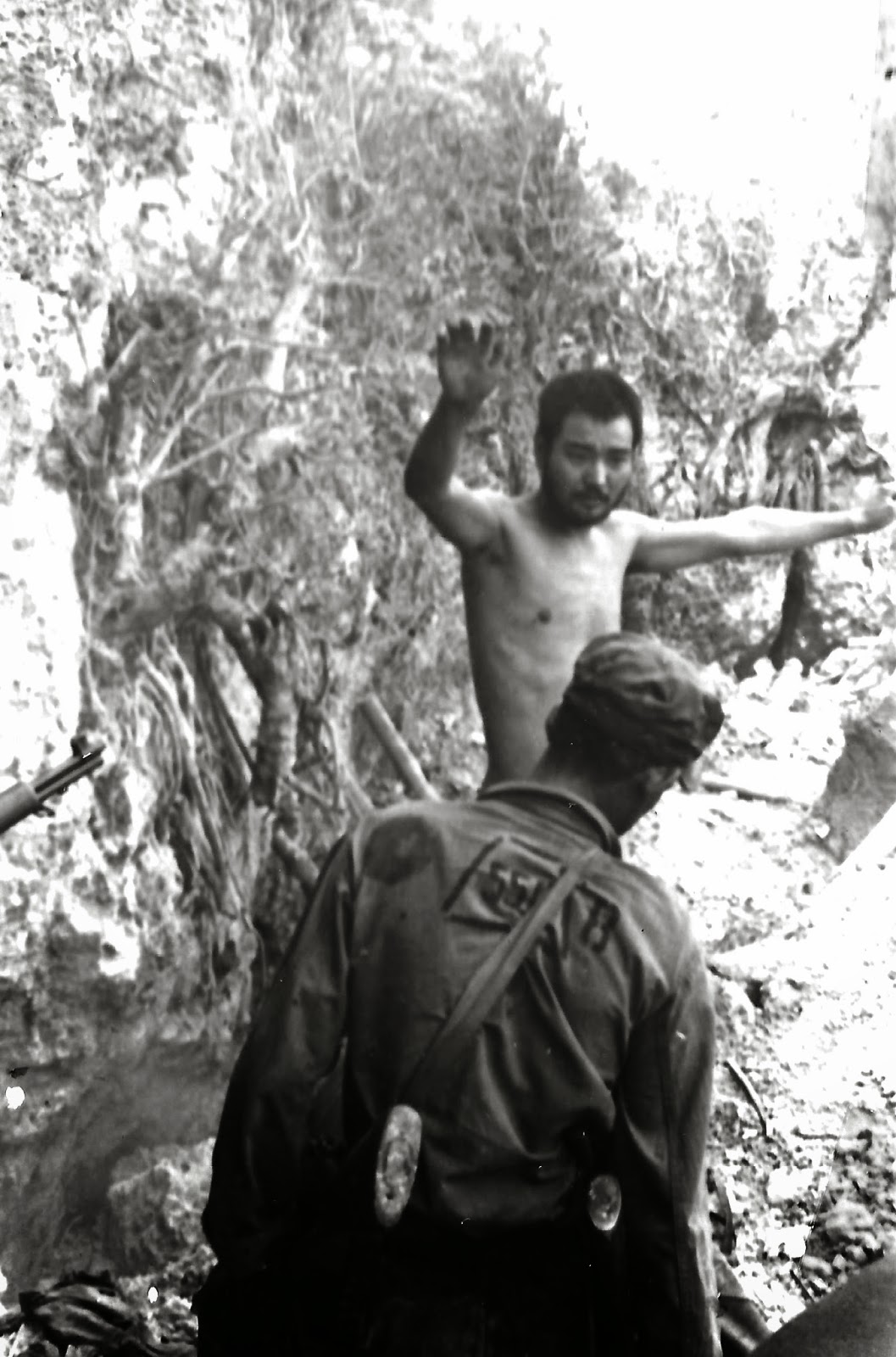 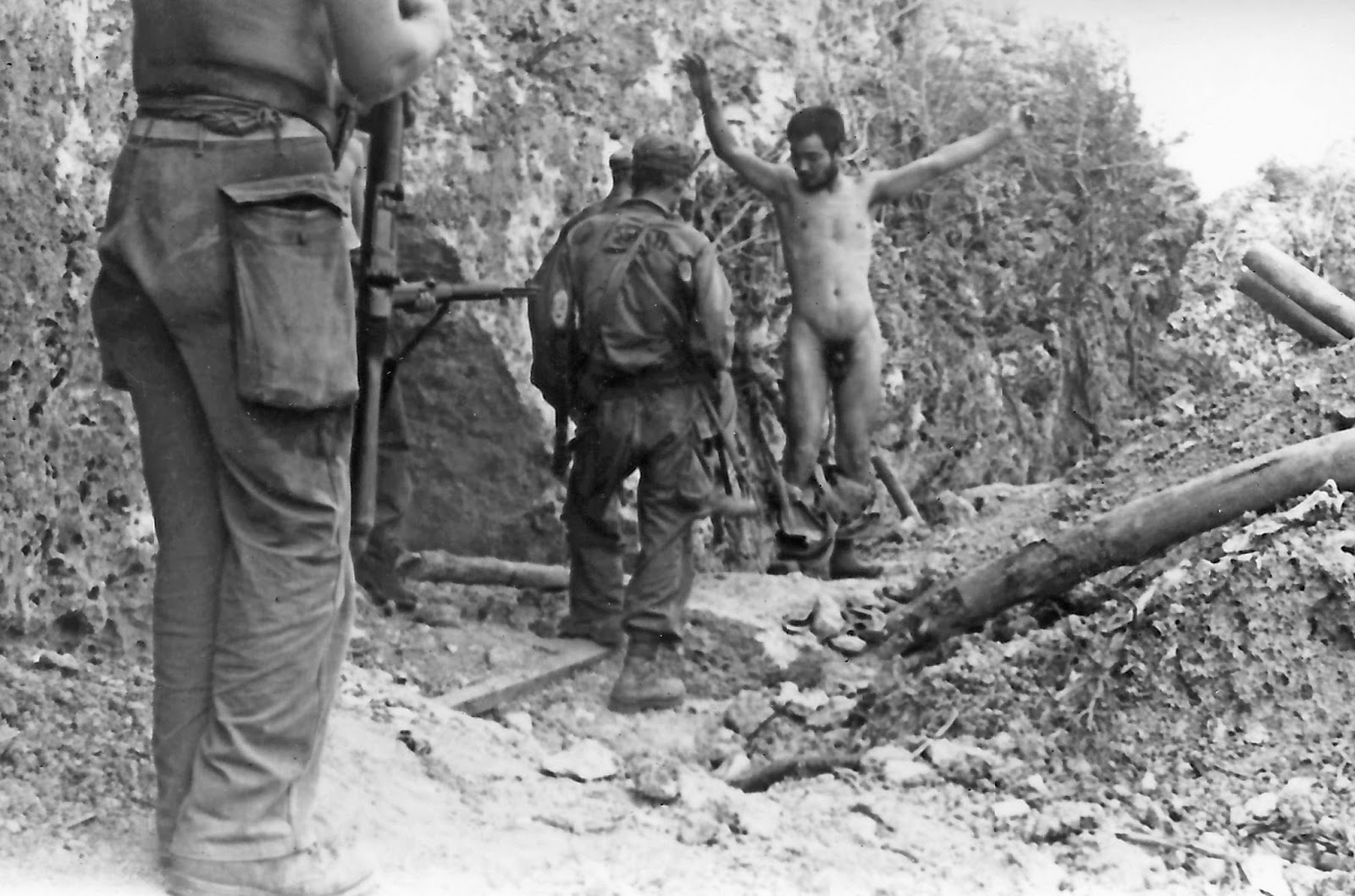 The soldier is stripped and searched for weapons. 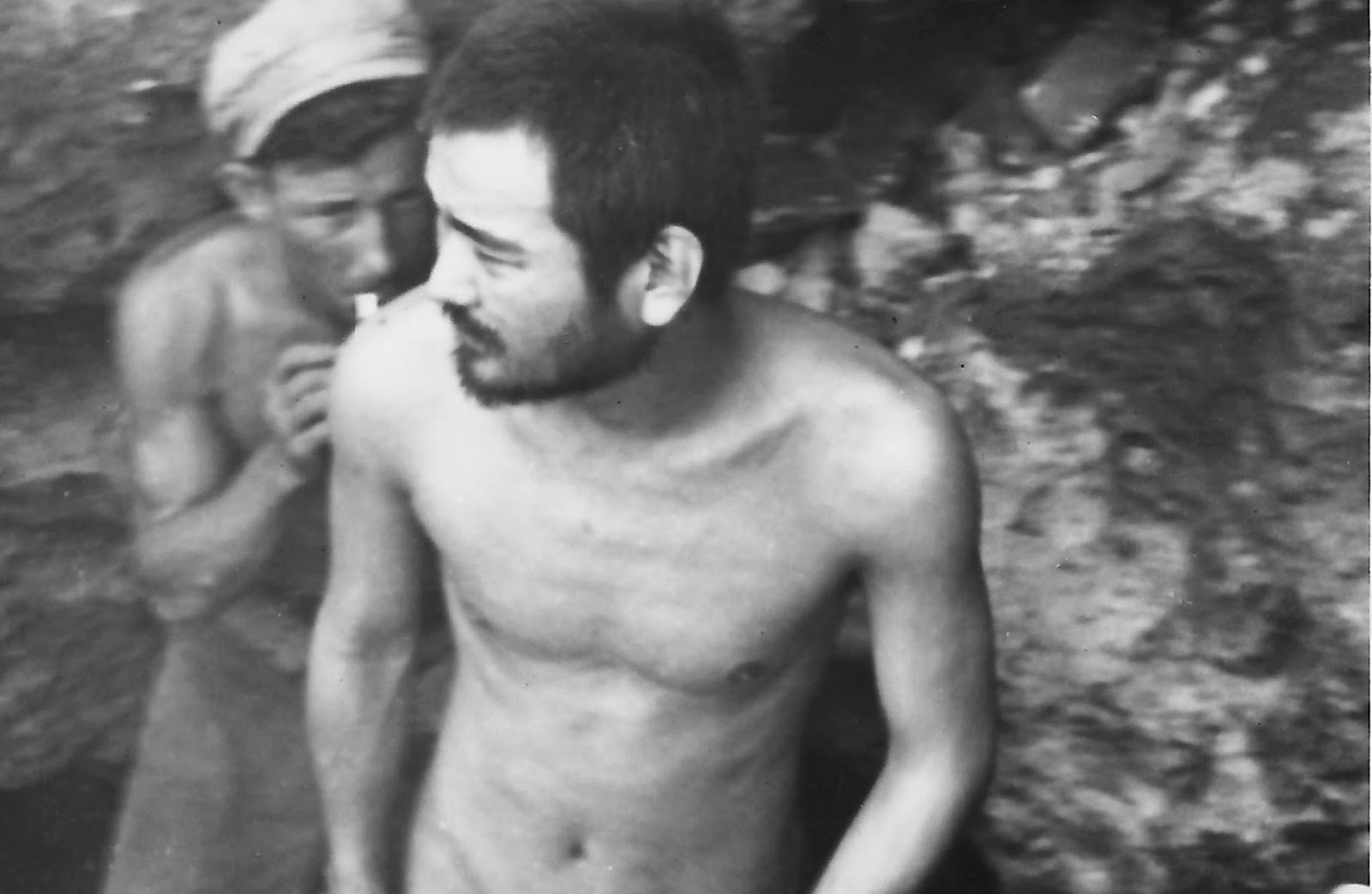 Then he is offered a cigarette. 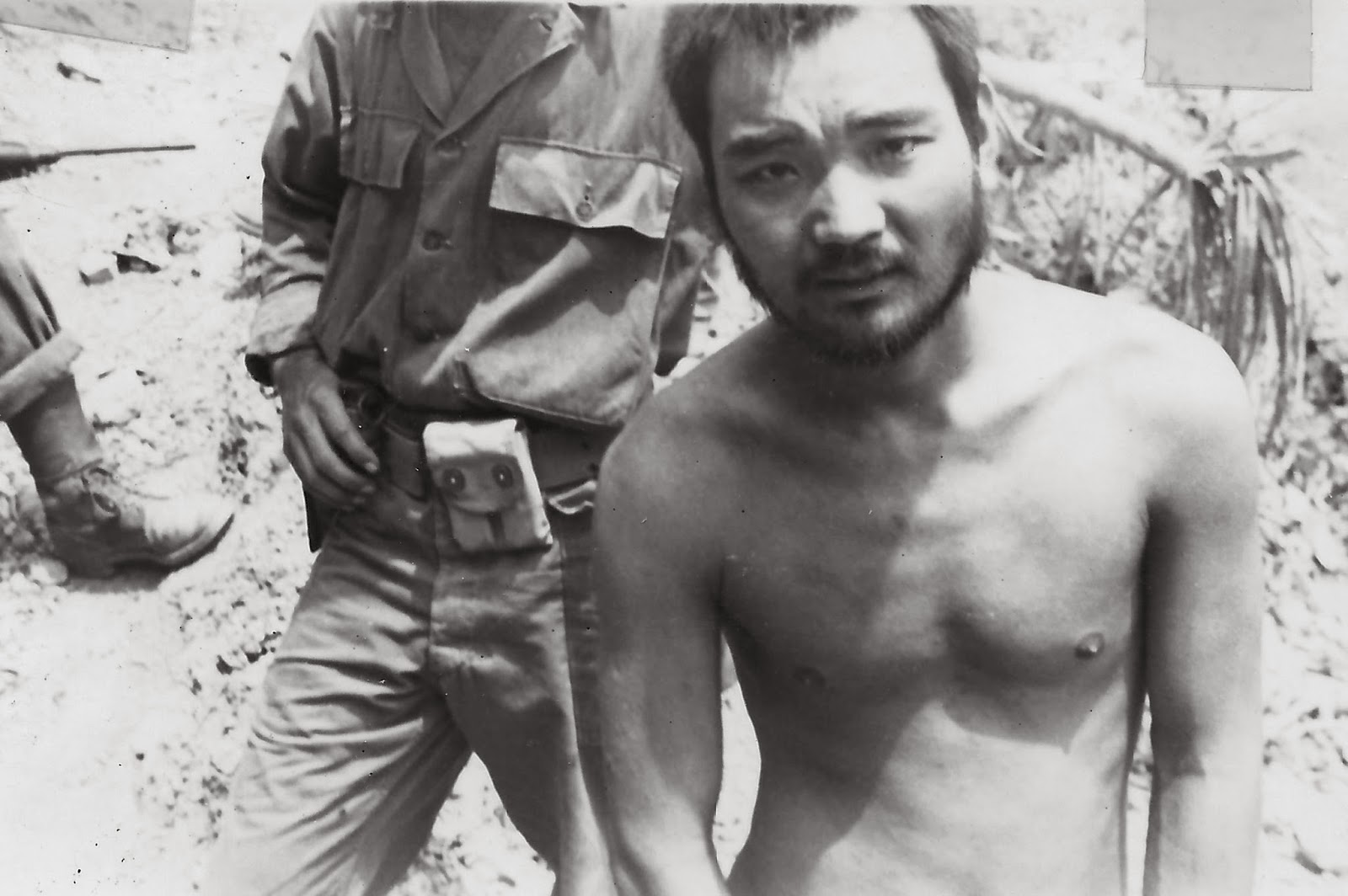 After the other soldiers inside the cave blow themselves up, the team marches back to their jeep with prisoner in tow. I wonder who this young Japanese soldier was and if he lived to have a family and children of his own. I hope so. 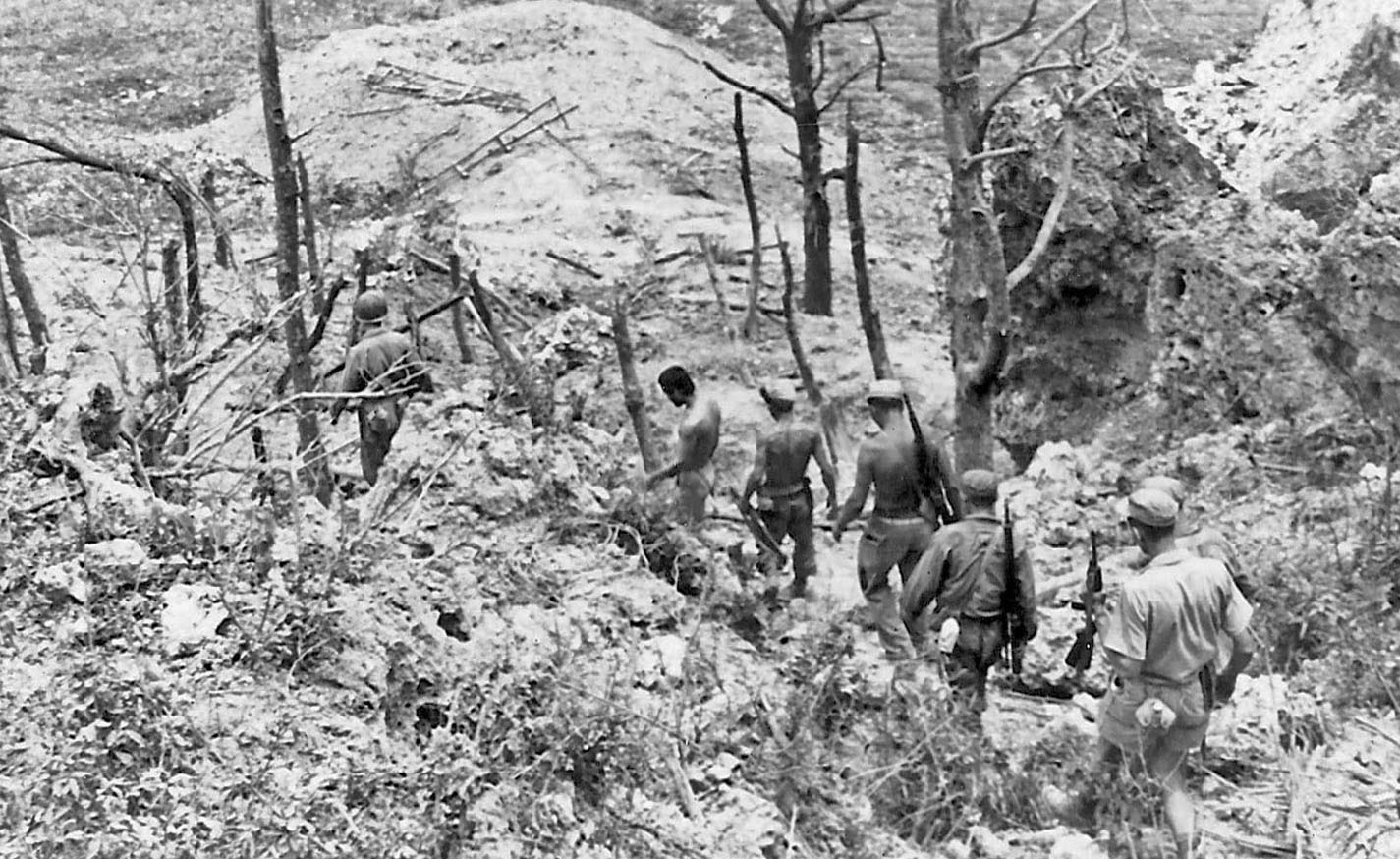 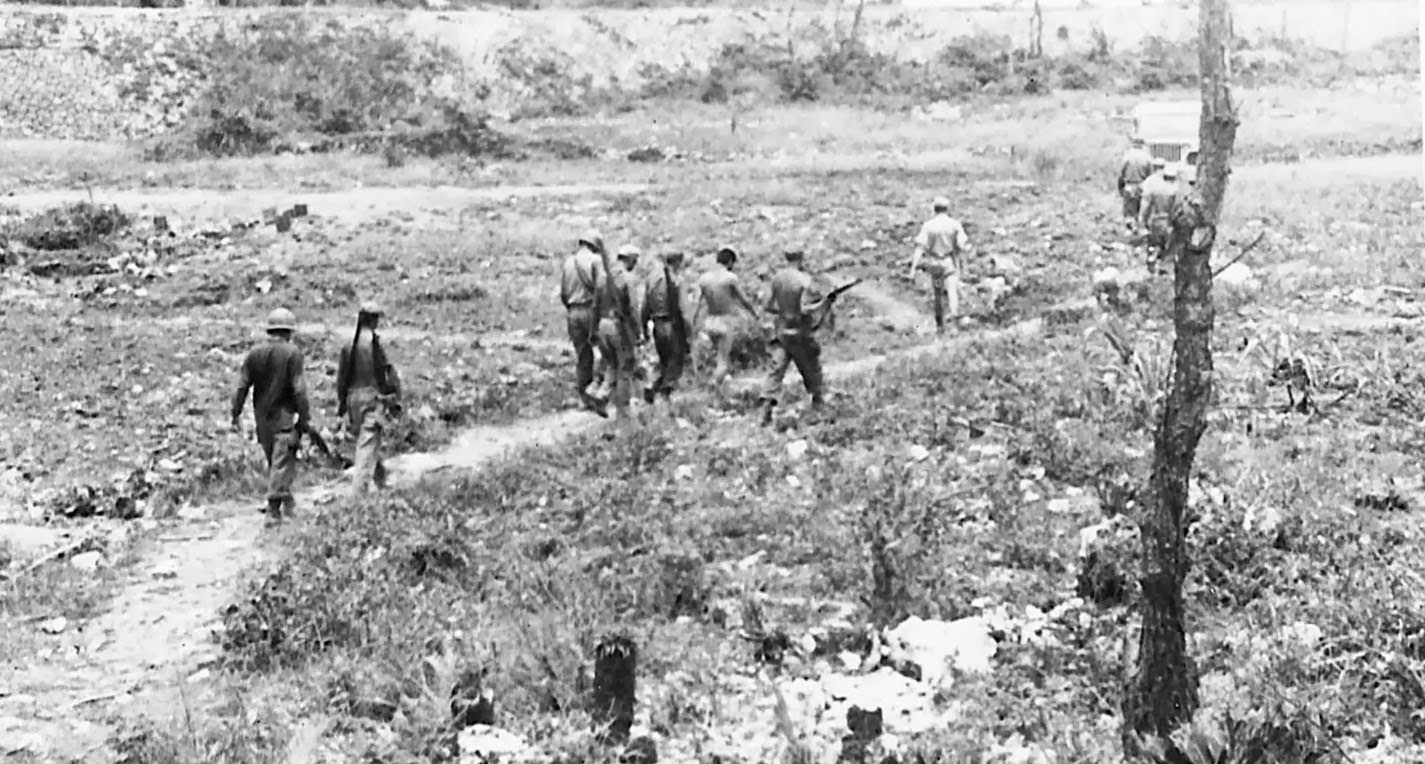