While he was stationed on the island of Guam, Lt. R.T. Kowallis was flown over to Okinawa in early May 1945. Fighting was still going on on Okinawa, but the American forces had a firm hold on the island and the Japanese were in retreat. While there, Lt. Kowallis took a number of photos of the native people that he sent back home to his wife Norma in the States. Here are the photos and a letter he wrote back home on May 8, 1945. But first a photo of Lt. Kowallis shown here before he left for the Pacific theater holding his baby daughter who was born in August of 1944: 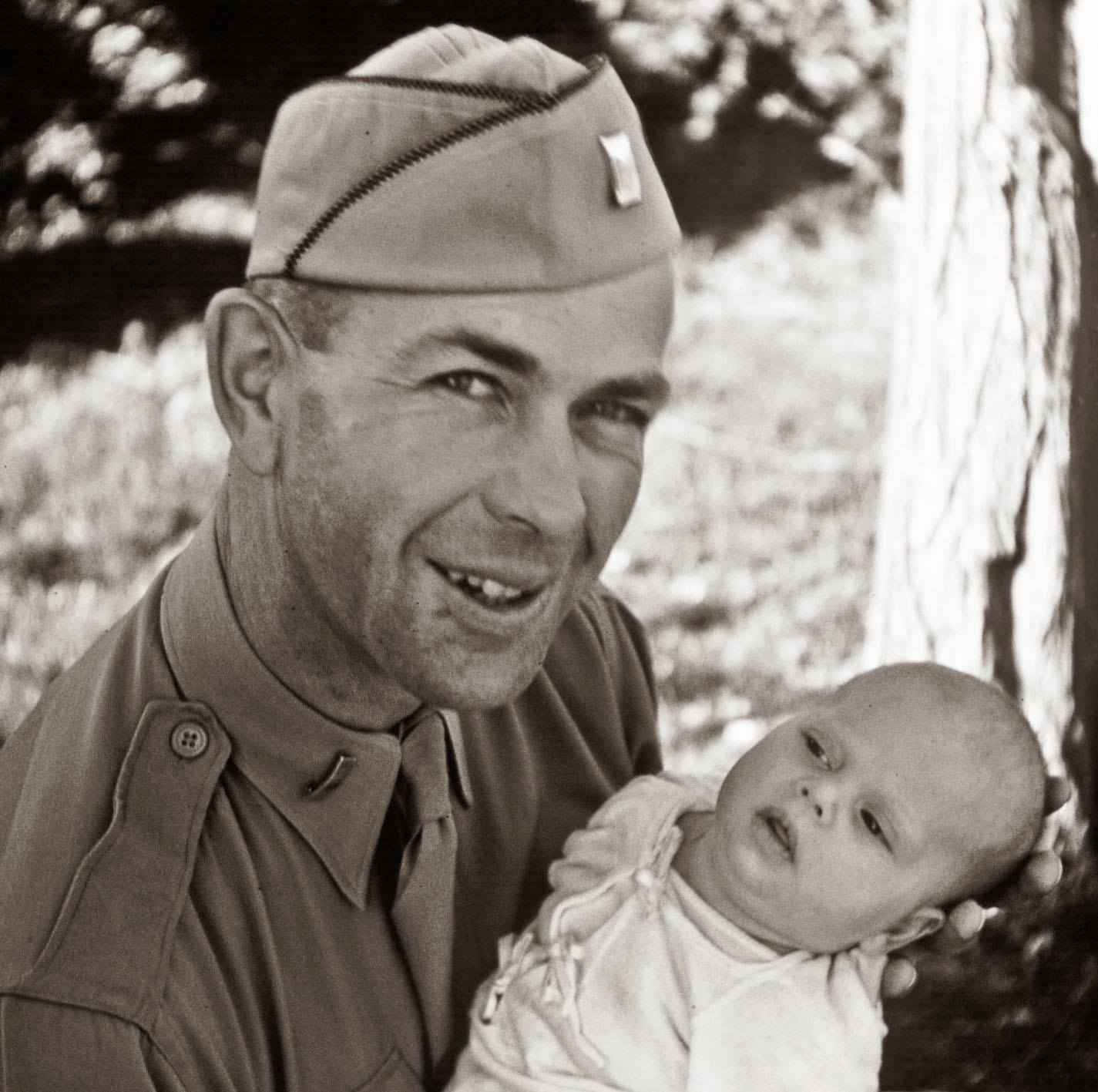 You can see more 1945 Okinawa pictures on my Shuri Castle post and you can read more about the Battle of Okinawa on Wikipedia, PBS.org, and History.com.

Guam
8 May 1945
Dearest Norma,
I have been so busy today I have hardly had time to think, but in the evening my thots always come back to you. Now if you would just come over for a visit I could give you some of these ripe bananas that are hanging above my head. Another day and they will be just right to eat. Oh yes, and my cantalopes are starting to bloom already. The watermelons aren’t doing so well, however. The ants have their cows feeding on them, and you know what that does.
Before I forget, I want to mention that Martin got a box from home yesterday, and in it was a piece of fruit cake. It was still perfectly good when it got here. She had it very well packed. So if you want to send me one be sure and pack it good and air tight, and it will get here OK, I think. Also, if when you send me magazines you will put them in large brown envelopes or wrap them good then send them first class mail they will get to me faster. Martin has received several things from Wis. that were sent after the date that you say the first magazines were sent to me, and I still haven’t received any of mine. Did you send mine first class mail?
Martin has one of the native boys do his laundry. This evening he was here and we have been asking him about the treatment the Japs gave them, and some of the native customs. He said the Japs that could speak english treated them quite well. The others he said were mean to them. They had to work for the Japs who paid them one yen a day (about 25¢). He said he worked in a mine, and when ever the Japs were not watching them they would stop working, and sit down. They always kept some one watching so when the Japs came back they would start working. If they ever got caught they were beaten, and often killed. Food got rather scarce during the months of occupation. Some times they had no sugar, salt, or rice, and they had to give the Japs half of every thing they raised. The Japs took nearly all the live stock.
This lad wants to go to the States after the war. He says out here you can’t take a girl out after dark or her father or brother will kill you. All the courting has to be done in the family or at church. They sort of[f] many the gals and count them after. He has sort of a distorted idea about all these high paying jobs in the States. He thinks that after the war he will be able to go back there and get a job for $50 to $80 a week. We tried to discourage him on that point. Here, when ever a native family kills a cow they call the neighbors in and divide it with them. He said he didn’t think they did that in America, and how true it is.
In regard to the American invasion, one of the boys asked him, “How was it, pretty hot here when the Americans came?” He said, “Oh no, it was a cold, rainy day.” Did we laugh.
On Sunday, I was able to go to church with Ray on Okinawa. There were about 10 of us there as I remember. None from Ogden but myself. Chaplain Curtis was with us. He is going on leave soon so we may not see him again. It being the first of the month, we held a testimony meeting.
They other night on Okinawa, Ray and I were walking around about ¼ mile from camp looking for berries, etc. with no thot of Japs being around, but the next day when I went back up alone, the engineers told me they had just flushed a couple out of the very area we had been walking through. They had a patrol looking for them then. Guess I’ll have to stay in camp from now on.
The last night I was there, there was no air raid but the Japs were shelling the Air field. About eight in the evening one of the boys was coming across the field in a jeep with a Col. when a shell landed some where around. He made a comment on it, but the Col. said, “Oh that’s only our own artillery.” About two minutes later a shell landed within a hundred yards of them. That was more convincing, and they got out of there in nothing flat.
About midnight the shells were screaming over our tents. I know of no sound that will make chills run up and down ones spine more than a passing artillery shell. When ever we hear them coming we always make the comment, “Well, sounds like Millimeter Pete’s at it again.” So far it has not been dangerous for us, just annoying. No one gets much sleep.
The things you write me about the future sort of make me wonder if we should start a business or not. But I guess we can decide that when I get home. I do believe that shortly after the war money will be one hard item to get the hands on.
Oh yes, more about Okinawa. I was setting in Ray’s tent when a shortage of chairs came up. I asked them why they didn’t go out and get some from the deserted houses. Ray just laughed and said, “ they don’t have any. You are sitting on one of their tables now.” And sure enough I was. The tables are only a foot high. The people always sit and sleep on the floors.
I’ll send Cheryl’s picture back tomorrow along with a couple of other photographs I have.
I can’t think of any more news tonight. Anyhow, this is about all I can put in one Air mail letter.
Love,
Reinhart 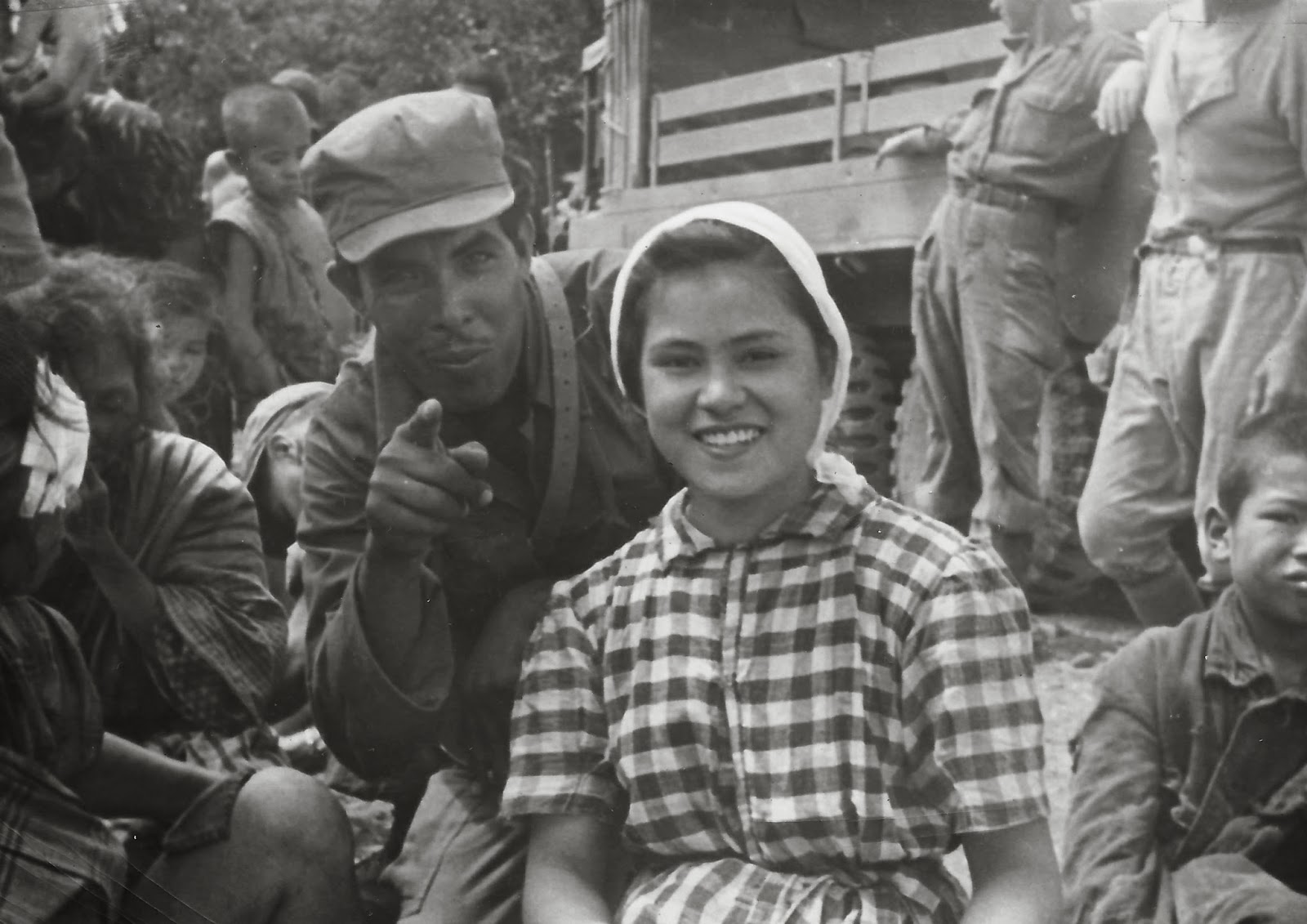 A lovely, young native Okinawan nurse with an American soldier in May 1945. 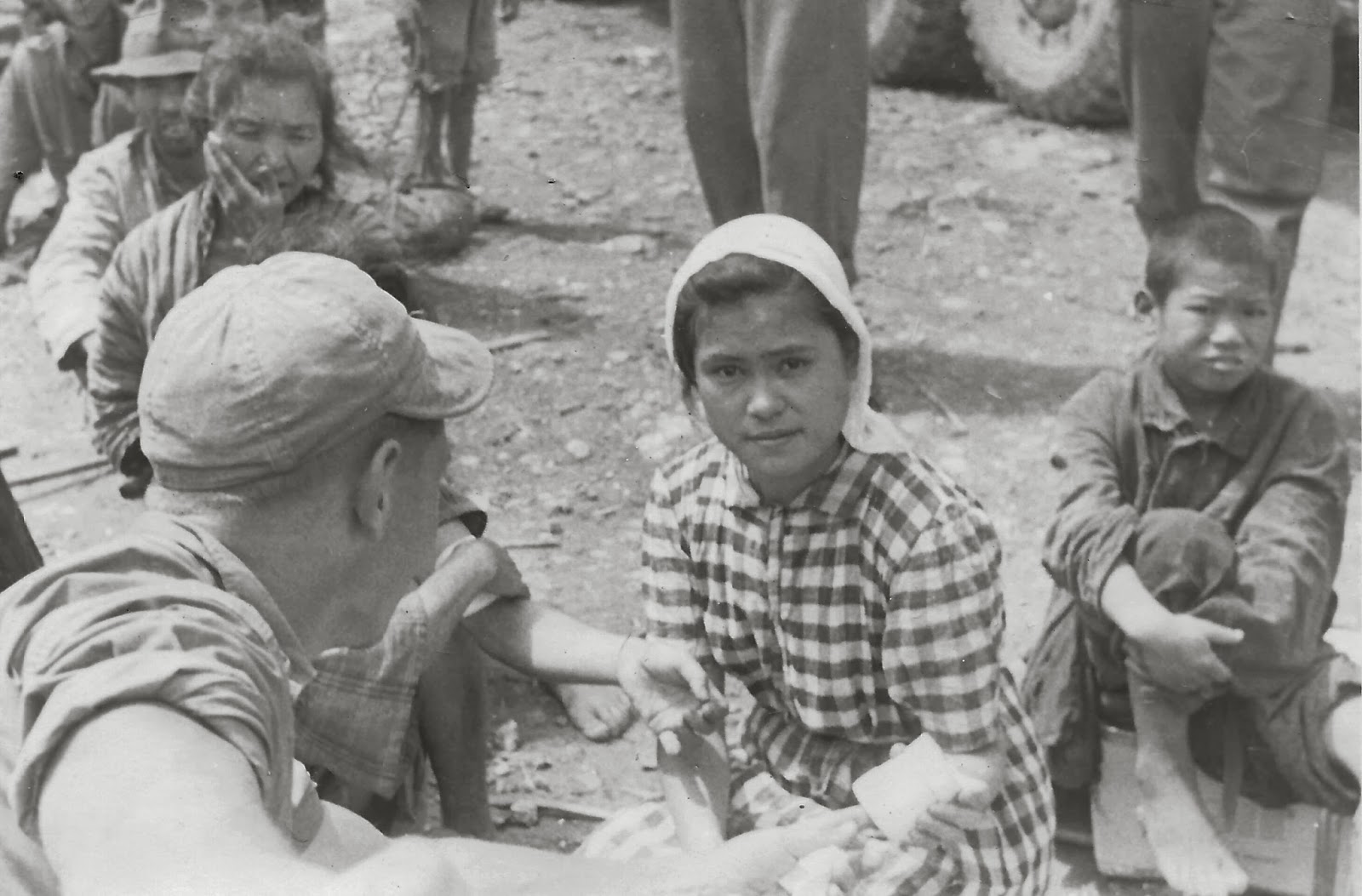 A second photo of the Okinawan nurse. 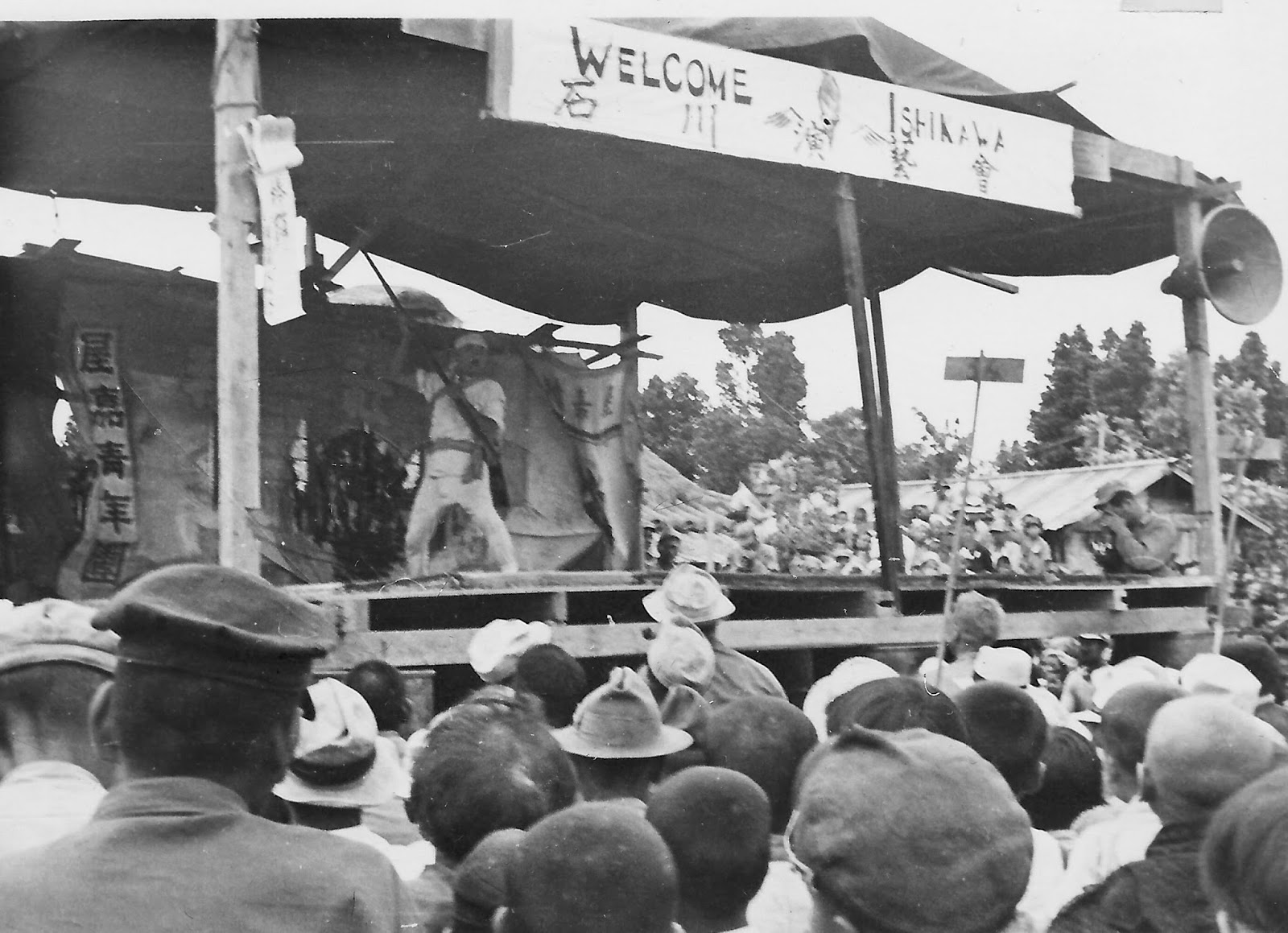 The photo above and the other photos below were labeled "Festival, Okinawa, May 1945." 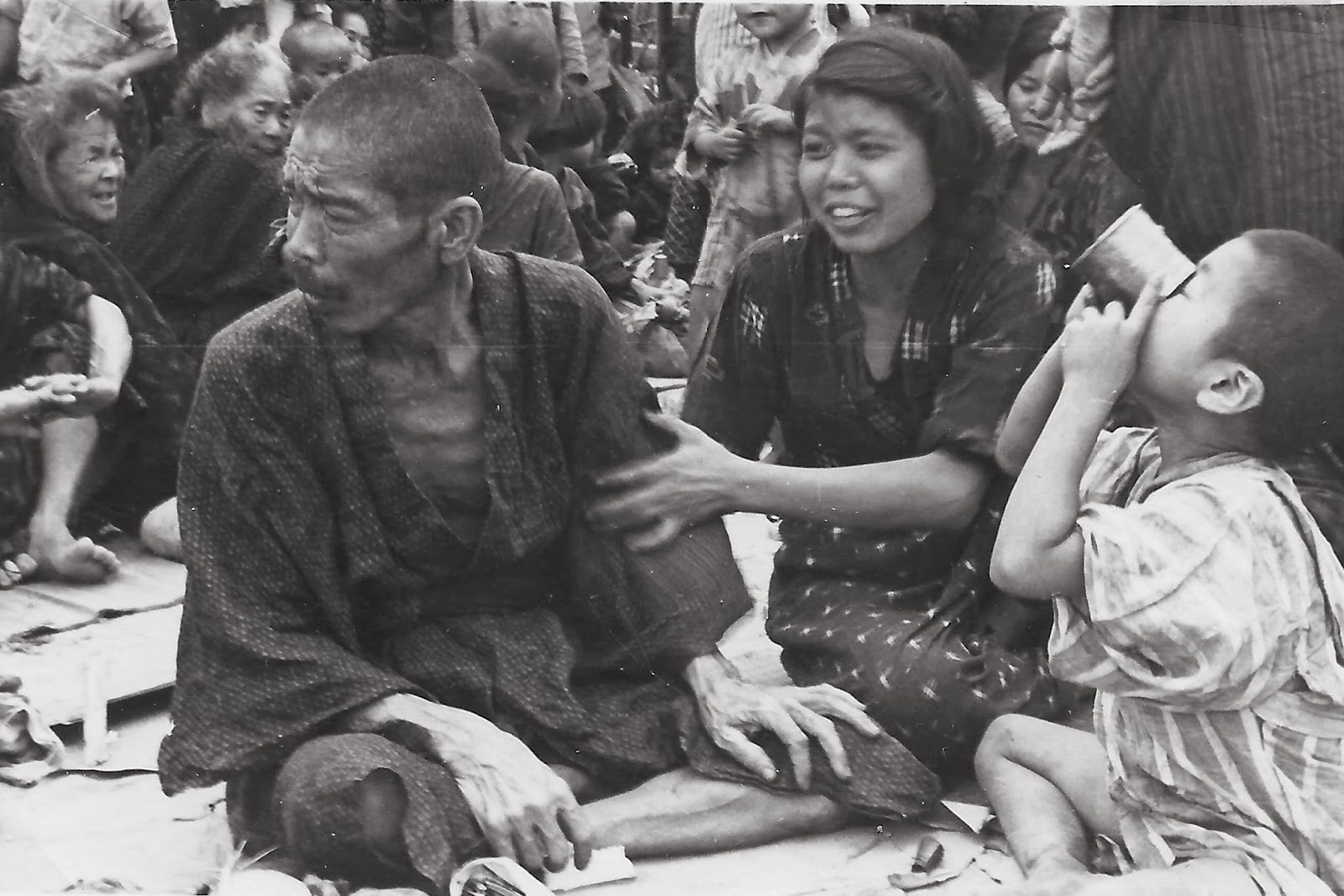 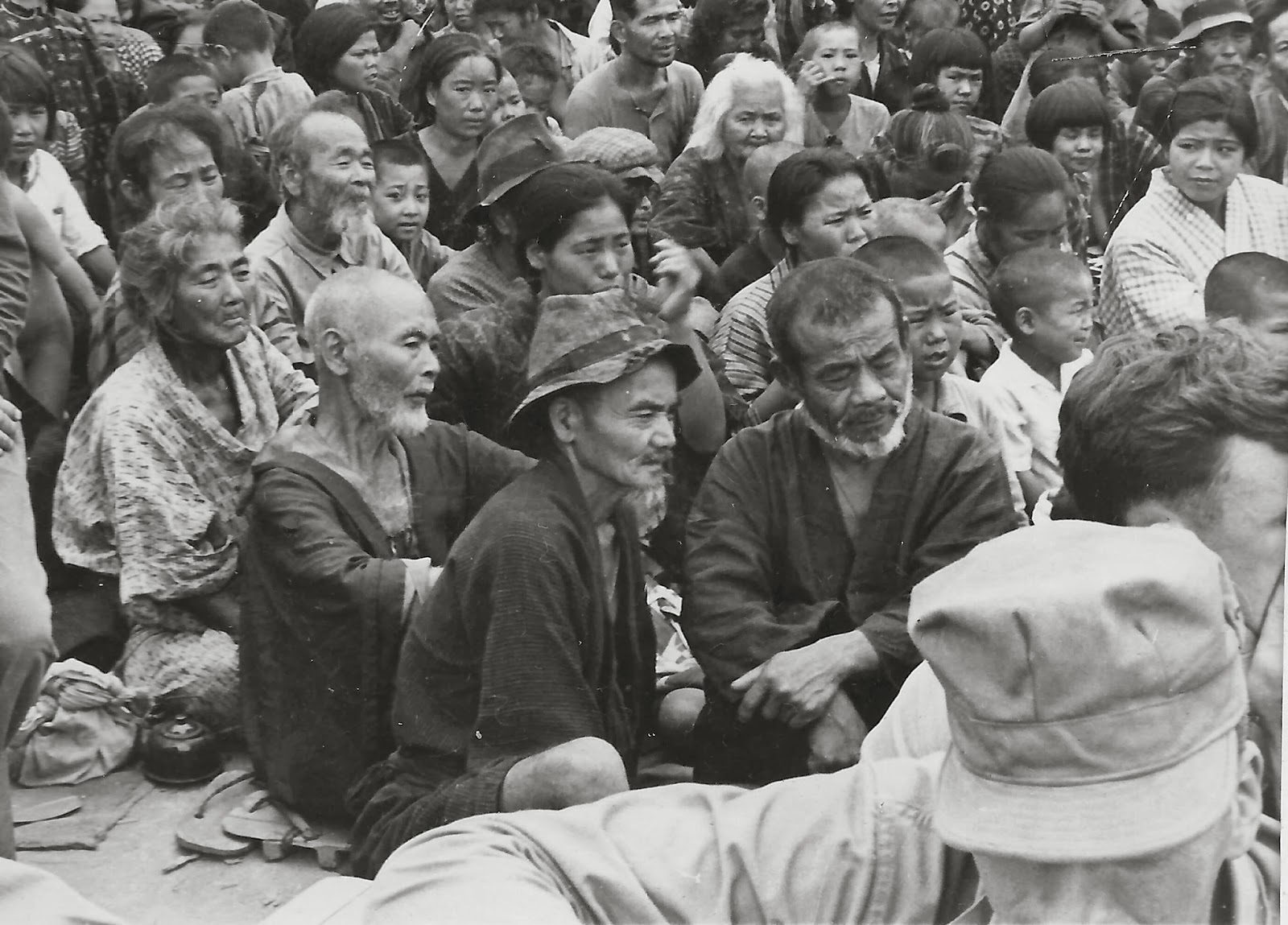 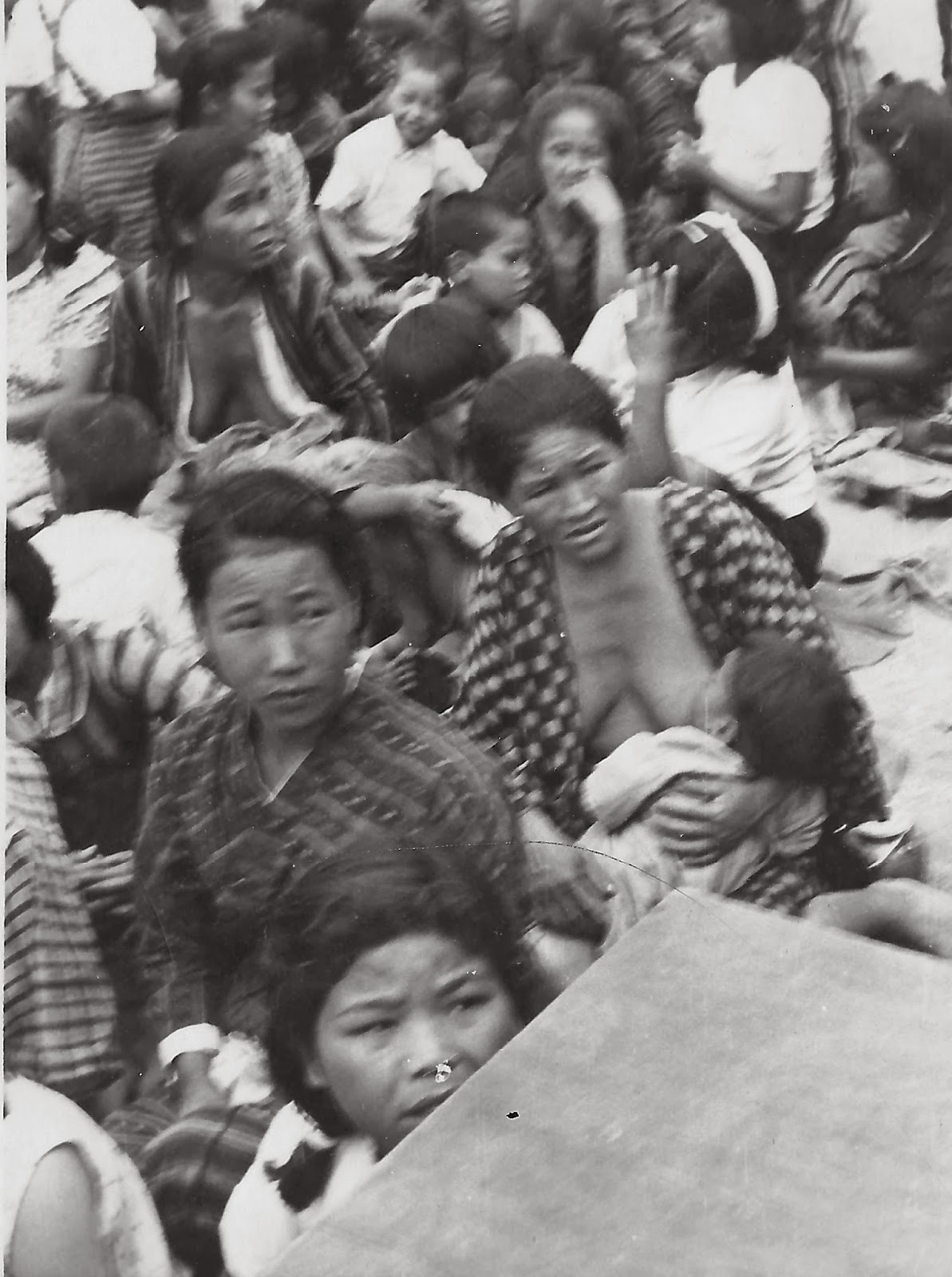 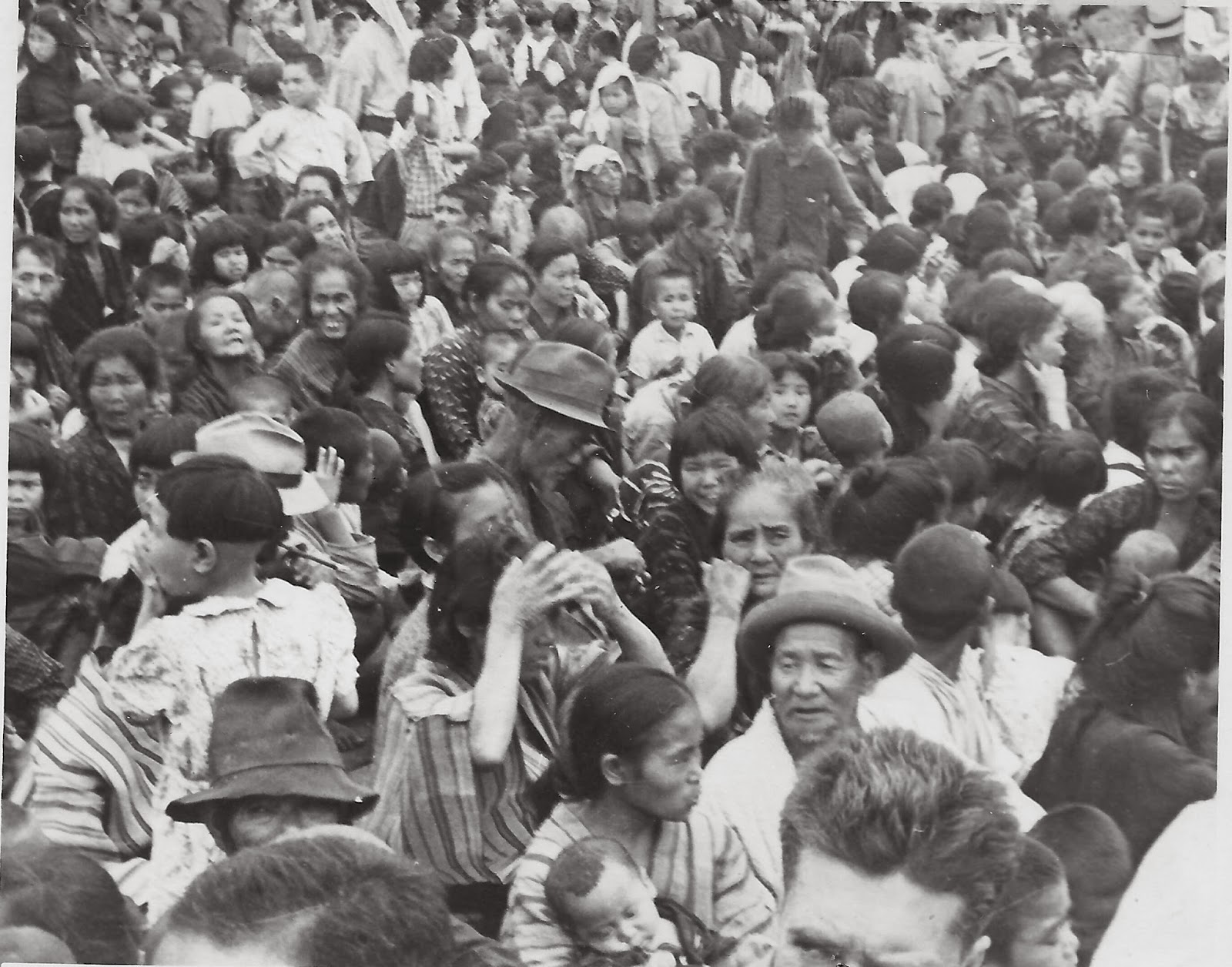 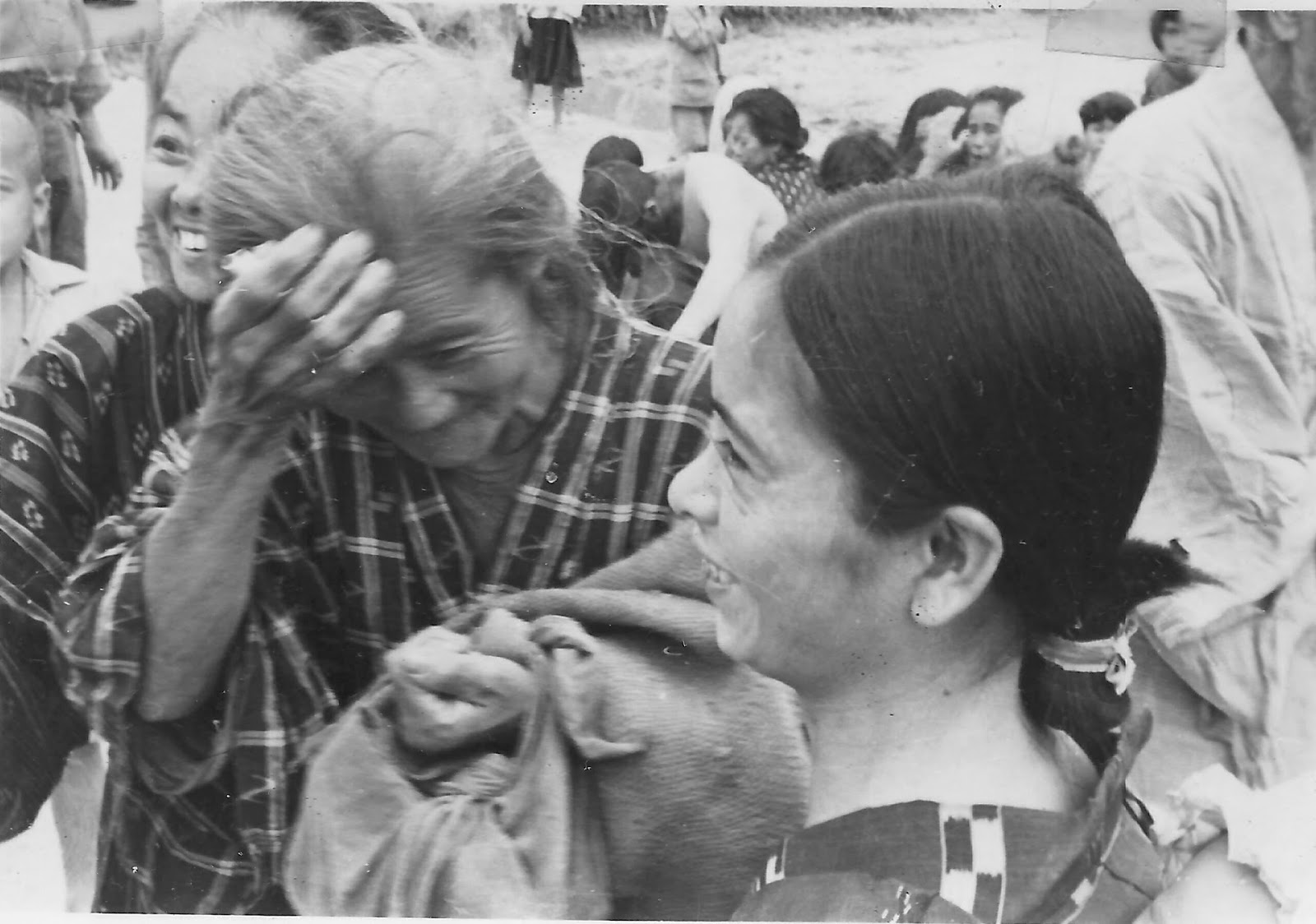 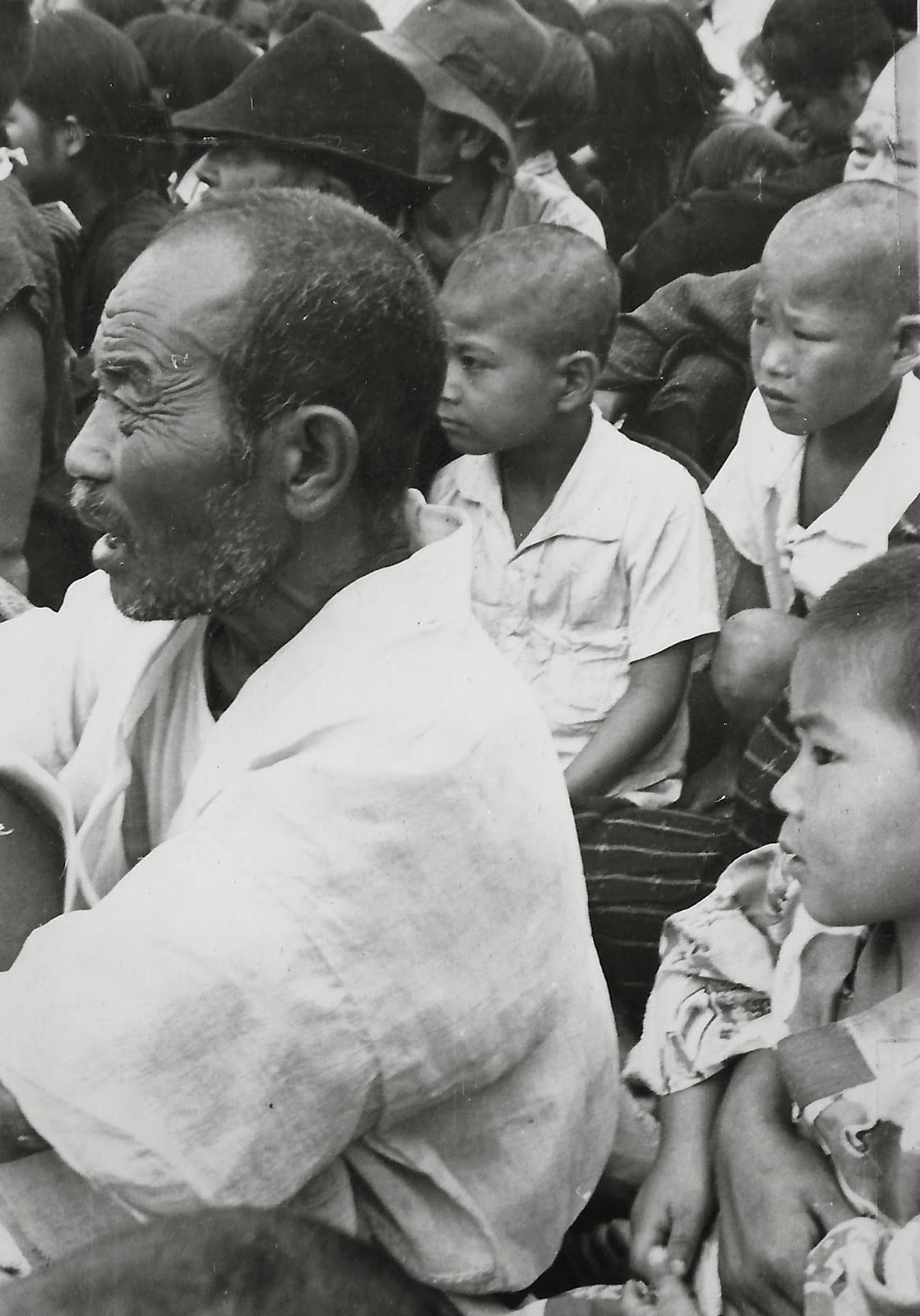 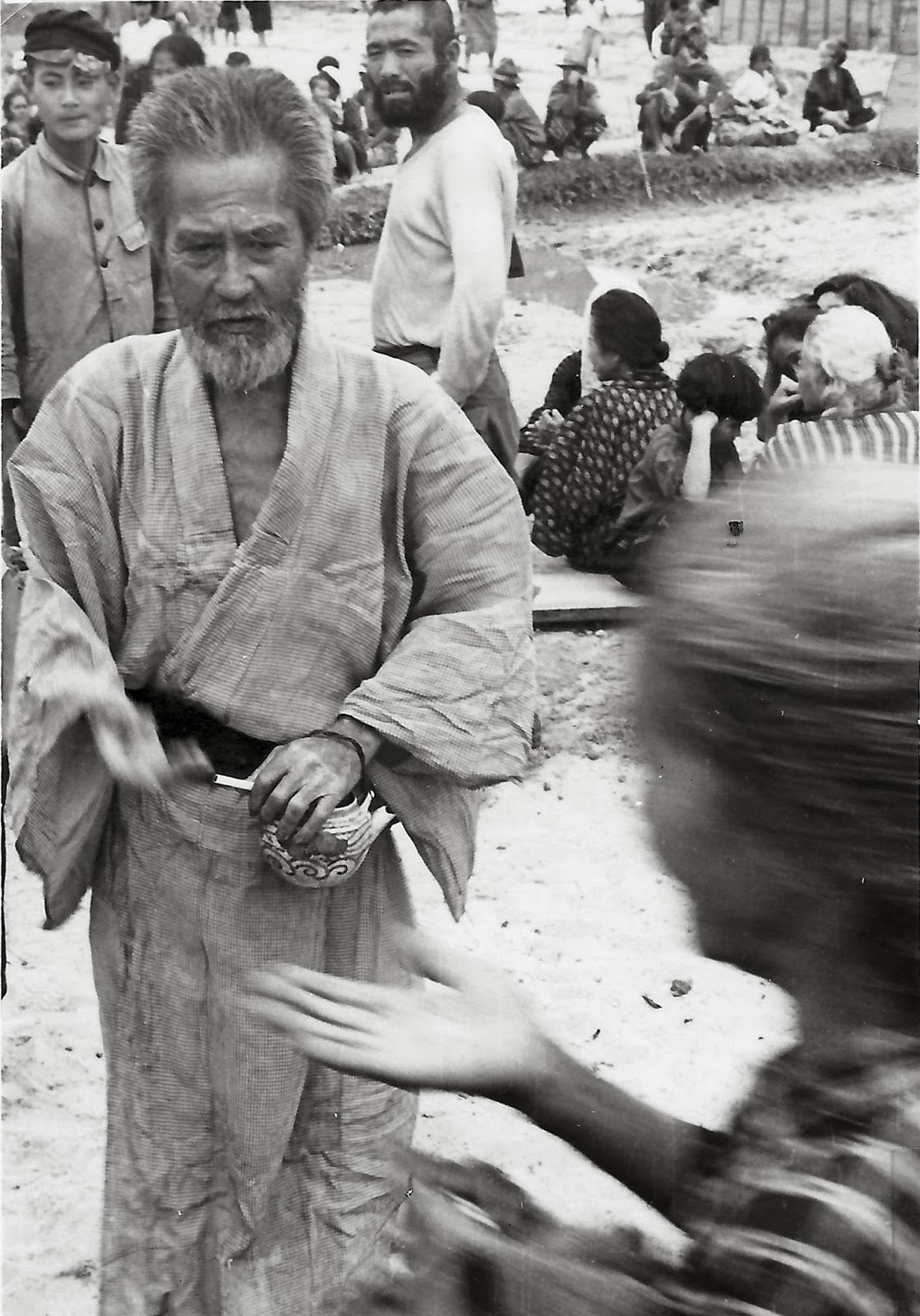 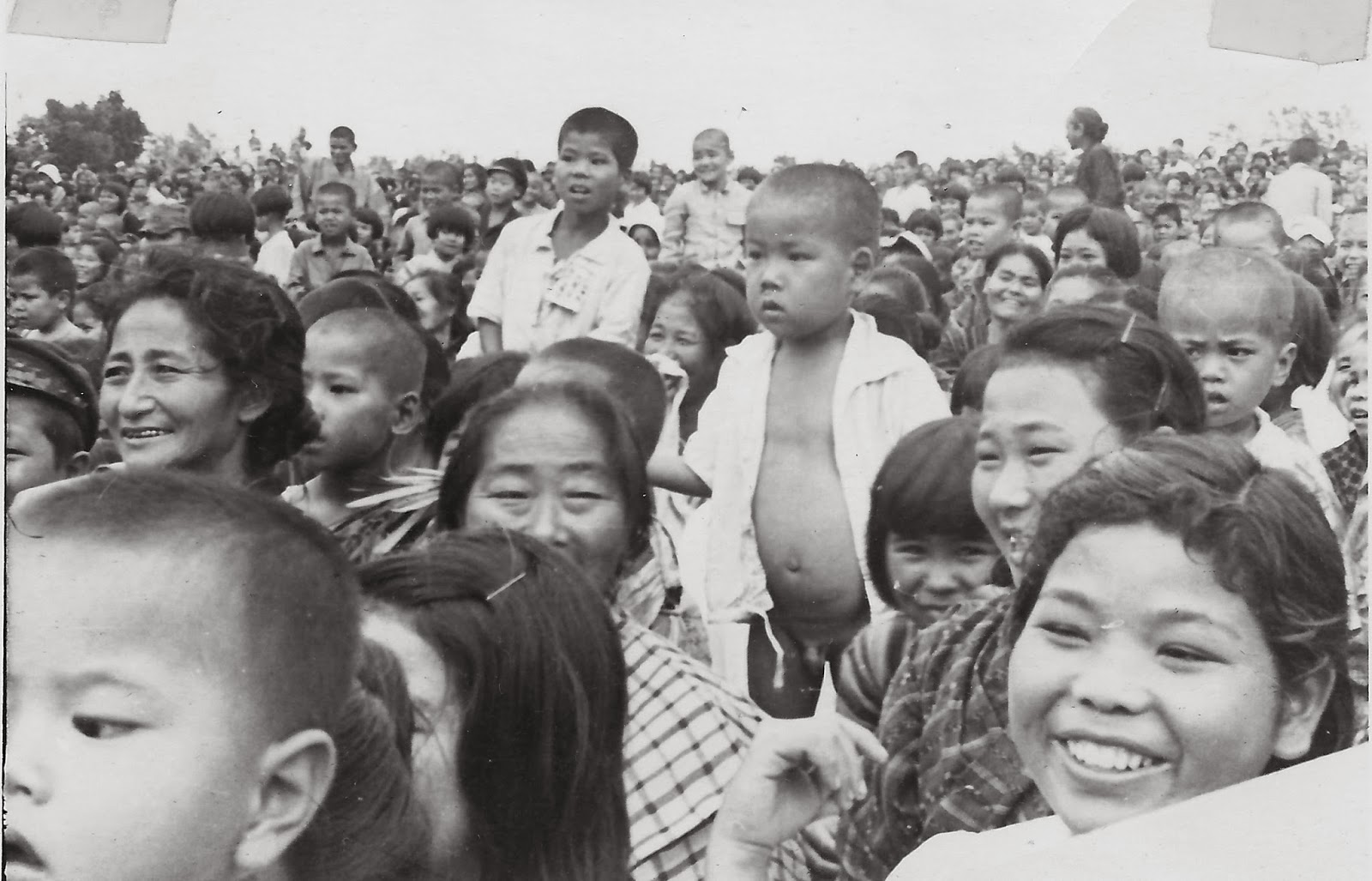